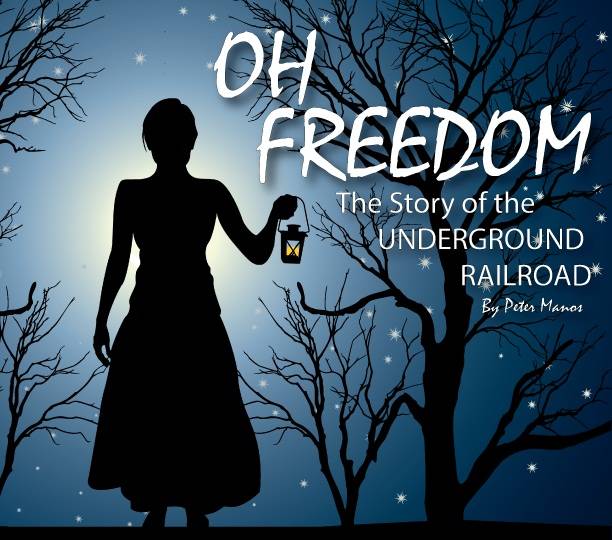 The Knoxville-based Word Players will be telling the story of the Underground Railroad as they bring the one-act play “Oh, Freedom” to the Tazewell campus of Walters State Community College during Black History Month.

The play incorporates the stories of those who fought against slavery prior to and during the Civil War. It celebrates the collaboration between men and women from all ethnic backgrounds who helped escaped slaves make their way to free territory.

The Ohio River was a natural divide between slave and free. Men and women looking for freedom could find help in the cities and towns along the southern region of Ohio. Places like Cincinnati and Ripley became hotspots of hope.

Men like John Rankin, who was a Presbyterian minister, educator and abolitionist, became known as one of Ohio’s first and most active ‘conductors’ on the Underground Railroad.

Born in Dandridge, TN, Rankin moved in 1822 to Ripley. His home, which still stands atop a high hill overlooking the Ohio River, could be seen across the banks for miles. Its 30-foot, candle-topped pole acted as a beacon for the weary travelers.

The Underground Railroad in the Ripley area had three interlocking components. The first, a group made up of mostly southern Presbyterian ministers, later united through an administrative body known as the Chillicothe Presbytery. The group established a web of relationships linking Ripley to other southern Ohio towns.

The second component was the activist abolitionists known as the Ripley Anti-Slavery Society. The organization enlisted 337 members during its first year in operation. Rankin served as the secretary.

The third component of the Underground Railroad included a sizable population of free blacks, and a small number of courageous slaves who lived across the river in Kentucky. Most of these free blacks were members of the two Gist settlements, located just north of Ripley. The settlement was comprised mostly of slaves and their ancestors from Virginia who were emancipated in 1819, after the death of their master, Samuel Gist.

Levi Coffin, an American Quaker, abolitionist, businessman and humanitarian, played as large a part in the Underground Railroad spanning from Ohio to Indiana.

Born in Guilford County, North Carolina, Coffin eventually found his way to the Avondale community of Cincinnati. Given the unofficial title of president of the Underground Railroad, it is believed Coffin assisted some 3,000 fugitive slaves to freedom.

The Coffin residence, located in the downtown Fountain City area, is often called the Grand Central Station of the Underground Railroad.

Coffin was exposed to and developed an opposition to slavery, at an early age. He immigrated to Indiana in 1826, escaping the persecution of Quakers by slaveholders. He became a local business leader, merchant and farmer. His accumulated wealth allowed him to become a major investor in the Second State Bank of Indiana, where he later became director. His wealth also allowed him the means to supply food, clothing and transportation for the Underground Railroad operations.

At the urging of friends in the anti-slavery movement, Coffin relocated to Cincinnati in 1847. For the next decade, he operated a warehouse that sold only free labor goods and continued to lodge runaway slaves in his Ohio home.

Following the Civil War, Coffin traveled around the Midwest and overseas to France and Great Britain, where he was instrumental in forming aid societies that provided food, clothing, funds and education for former slaves.

“Oh, Freedom” highlights such Underground Railroad architects as Harriet Tubman and Harriet Beecher Stowe. Songs from the era are included in the play, scheduled for Feb. 7, beginning at 2:15 p.m. No tickets or reservations are required and the public is invited to attend this special program.

The Word Players is a theater company whose actors rely on few physical props. Instead, the players focus on the powerful words involved in the production.

For more information, contact Eileen Bowers, international programming and student affairs specialist, at: 423-318-2347. Or, email her at: Eileen.Bowers@ws.edu.