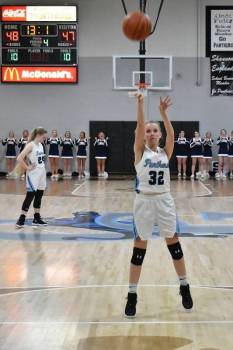 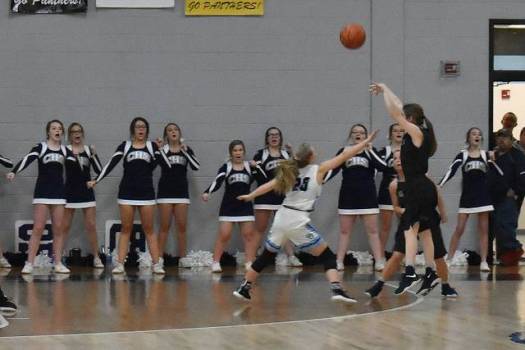 The last time Cumberland Gap and Claiborne High School played, they split the games, with the Lady Panthers getting the win and the Bulldogs taking the boys’ game.

This time, the Lady Panthers took to the court to defend their house. CHS led 3-2 early, and then a late three gave the Lady Panthers a 9-3 advantage after one period. Visiting CHS was being their own worst enemy by making careless mistakes, but the Lady Bulldogs finally got on track during the last moments of the first half and were down 11-10 going into the third period.

The Lady Panthers went back inside the paint to start the second half and extended their lead to 13-10. Claiborne took over the lead and then the Gap responded with a basket making it 15-14. This became a back-and-forth game, with the Lady Panthers leading by two after three periods.

CHS tied the game at 20 to begin the final period. Claiborne then led by one and the Lady Panthers took the lead by two around the 5:00 mark. With 2:20 remaining, CHS held a one-point lead that was erased at the Lady Panthers’ free throw line. With 1:18 left CHS called a time out to set up the offense. The Lady Panthers got a steal and the lead but fouled CHS on the other end. Claiborne missed two at the stripe and then had to foul. The Gap made it a three-point game and Claiborne hit a three, got a steal and made a basket but it was just after the buzzer. The game ended tied at 27 in regulation.

During the first overtime, Claiborne went ahead by two on a shot in the paint. The Lady Panthers hit one of two from the stripe and with 57.9 seconds the visitors led by one at 29-28. CHS turned the ball over and the Panthers tied the game at 29. CHS led by one and got a turnover with 16.4 remaining. Claiborne had to get the ball in play and make their free throws. They missed the front end of a one-and-one twice and then put the Lady Panthers on the line. They made the first of two and tied the game at 30 before taking possession on a jump ball. With .3 seconds left they got up a shot that went in but it was just after the buzzer.

During the second overtime period, CHS scored at 2:28 to lead 32-30. The Gap was fouled and hit one of two. Tied again at 32, CHS had the ball and 47 seconds to work with. At 4.4 they turned the ball over and CGHS had a little time to get up a shot or draw a foul but failed. After two overtimes the teams were tied at 32.

During the third OT, the Lady Panthers hit a shot that looked to be off the pole but to the amazement of CHS coaches and fans it wasn’t called. CGHS led 34-32 after a missed free throw. CHS had several chances to take the lead but with 1:03 left in the third OT were down by one point, 34-33. CGHS turned the ball over and Claiborne tied it again. The Lady Panthers had the ball with 22.6 seconds left and missed a shot, giving CHS a chance to win. They also missed and the game was tied again with only one second left. Claiborne failed to get a shot up and the teams went into the fourth overtime.

During the fourth OT, the teams were tied at 34 and something had to give. The Lady Panthers went into the paint for a basket. Claiborne could not get a shot to fall but was racking up offensive boards. The home team got a put back and led by what seemed an insurmountable four points. CHS hit a three making it 38-37. The Lady Bulldogs needed a three with 10.5 seconds remaining to tie and they hit one just as time ticked off again. The game went into the fifth overtime tied at 40.

During the fifth OT, CHS hit a free throw and the Lady Panthers took the lead in the paint. The two teams swapped the lead and the home team held a three-point lead at 46-43. The Gap scored again, making it 48-46. Claiborne went back to the stripe and tied the game at 48. A scoring error at 13.1 took a point away from CHS and the Lady Panthers led by two after one more free throw fell, 49-47. CHS had 13.1 remaining and the Skylar Cook ended the marathon with a three out of the corner despite the Lady Panthers having one last try at a three-quarter court shot.

CHS won what was likely the greatest game ever played between the two rivals by the final score of 50-49, but many left the night thinking there was no loser.

When asked about the winning shot Cook said, “When I shot the ball I didn’t know if it was on target or not, but when it went through I felt absolutely amazing.”

“I’m proud of us for not rushing most of our shots in overtime; we got good looks and I’m really proud that we won one of these big games,” she said. “I have been telling them we will win one, just keep trying and playing within yourself and we did tonight.”

Emma Beason led the Lady Bulldogs with 16 points, Jaden Thompson had 11, Macie Sumner and Skylar Cook both dropped in eight. Hailey Sexton and Kelsey Munsey had three each. Kaylee Cox rounded out the total with one point.

Hailey Hinckley led the Lady Panthers with 11. Tabitha Roy, Hannah Heath and Emma Brooks all dropped in six. Nevaeh Kerns had five, Kylie and Abbie Fultz both had four, Jaden Brock had three and Maytaya Ausmus finished with two points.