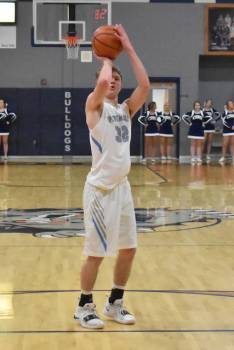 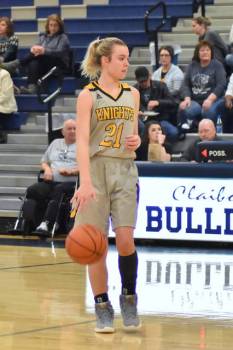 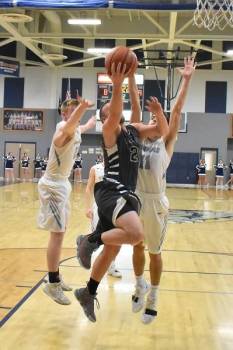 After a long season of basketball, area high school teams were ready to begin their pursuit of a district title. The West Greene and Chuckey-Doak girls opened the 2018-19 Blue Ridge Athletic Conference, District 2AA Basketball Tournament hosted by Claiborne High School Feb. 14 with a play-in game.

Both teams were hesitant to begin the game and it showed with slow scoring. The Lady Black Knights got to the rim easier and pulled away slightly, but by the end of the first period the score was only 13-9 with the Lady Buffaloes hanging close. Starting the second period, Chuckey-Doak was staying just ahead of a hard-working West Greene team. A WG three-pointer narrowed the game to a single point at 17-16. At 1:12, WG led 20-19 but the Lady Black Knights were able to hold a 22-20 at the half.

Coming out of the break, the Lady Knights extended their lead to five but WG would not give in and by 2:11 they were down by one point, 30-29. With 20 seconds remaining in the third, WG took a one-point lead, 31-30. The Lady Knights took back the lead and were still after the upset. At the 4:14 mark the Lady Knights were up five points once again and then got the advantage of two technical foul shots plus made a basket to extend their lead out to 39-31. WG still did not quit and with 2:08 left the score was 39-34. WG had one more run but fell short by the final score of 39-37.

Rebecca Higgins led the Lady Knights in scoring with 10 points while Lexi Anderson led the Lady Buffs with eight.

The next game was the rubber match between in-county rivals Claiborne High School and Cumberland Gap. After splitting wins during the regular season, both teams needed to win the play-in game plus one more to qualify for the region tournament.

Bulldogs Head Coach Corey McGinnis had this to say about how they planned to face their rival for the third time, “At this point of the season there are no secrets. We know what we have; we know what they have. We just have to react to whatever he (Ernie Mac Clawson) throws at us. I told our team that I expect him to press more than he has all season so we worked on it.”

Evan Jackson hit a three for the Panthers to start the game and Daniel Atkins responded with a basket in the paint. Jackson hit a basket but CHS tied it at five with a three from Jacob Williams. Atkins then gave CHS its first lead at 7-5.

Miles Cole tied it at 7:32, then Dalton Miracle made a three. The Panthers extended their lead to 17-7 after one period. During the second period, Nathan Fuson and Jackson pushed the Panthers ahead 24-10, causing CHS to call a time out at 5:48.

Atkins and Williams were the bright spots for CHS as they tried to close. Kade Beeler got on the scoreboard, followed by a Williams basket, making the score 28-19. Another Atkins basket got CHS to within seven. Braden Williams pulled CHS to within seven points again at 30-23 with just over a minute remaining in the half. The half ended 35-25 in favor of the Panthers.

Jackson got behind the defense to start the second half and Fuson added points at the stripe. CHS finally got something going with Williams and Atkins but Trey Turner responded, 41-30. Jackson was still playing lights out and racking up the points.

Evan Poore hit a three to help keep CHS within 10 and then quickly it was a five-point game at 45-40. Alex Blevins gave his team a seven-point lead at 47-40, but more importantly stopped the CHS momentum. Ethan Poore hit a basket in the paint to pull CHS back to five.

After three periods the score was 49-42 in favor of the Panthers. The three wouldn’t fall for the Bulldogs but Atkins was working hard to clean up misses in the paint. J. Williams added a basket, making the score 51-46. Fuson added two at the stripe and Cole added a three, 56-46.

The Panthers rolled on out to a 68-52 lead due in part to Claiborne being ice cold during the final period. It was the Panthers’ night as they completed the game strong and won 75-62. Leading the Panthers in victory was Blevins with 15, along with Cole and Jackson with 14 points each. Jacob Williams dropped in a game-leading 21 and Atkins had 18 in the loss for the Bulldogs.