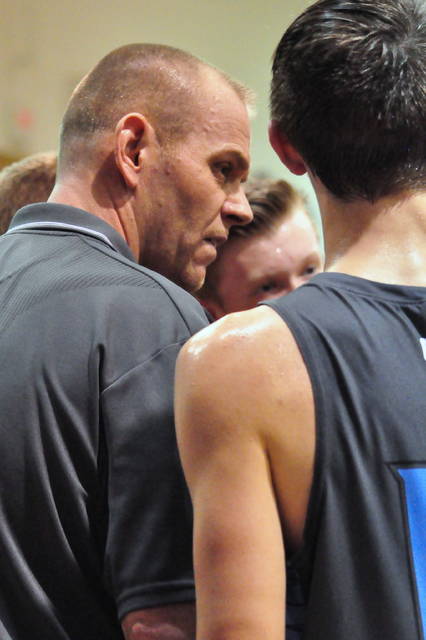 Ernie Mac Clawson delivers advice during a time out.

The Cumberland Gap Panthers basketball team learned Feb. 25 that head coach Ernie Mac Clawson was stepping down from his coaching duties. Clawson is a coach that led his 2015-16 basketball team to the Blue Ridge Athletic Conference District Championship.

More importantly, Clawson is loved and respected by all who know him. One of those people is the current boys basketball coach at H.Y. Livesay and Ernie’s brother, Brandon Clawson.

Brandon took a moment to describe what his brother means to him.

“My brother has always been the biggest influence on my coaching career. He has taught me a lot about the game, and he is someone I can always call and get ideas from. I think he is the best coach around here, but more importantly he’s an even better person.”

Former players have also made statements about Clawson including Jeff Poore who stated, “Coach Clawson was my JV coach. He was one of the best coaches I ever had. He pushed me to be the best I could be. As a high school basketball referee, I could see that he continued to get the best out of his players. I hope the best for him in whatever he decides to do in the future and want to thank him for the mentor he was to me.”

Former Panthers basketball standout Ben Owens commented on how Clawson was a role model for him during his time at Cumberland Gap.

“Coach Clawson is one of the few true role models I’ve had in my life. I met him as a scared, misguided 5th grader and he eased my transition of coming to a new county where I knew no one. He then taught me all that he could about the game of basketball by the time I had left Livesay,” said Owens. “We kept in touch throughout my time at CGHS, but during my senior year I had the privilege to learn again from Ernie Mac as a coach.

“During this year, basketball became secondary to the lessons he taught me about what it meant to be a man and the importance of keeping your relationship with God as the centerpiece of your life. Now seven years removed from our time on the court together, coach Clawson is still someone I aspire to emulate every day, and I am proud to call him my friend.”

As you can clearly see by the comments of former players and fellow coaches, Clawson is very respected. Upon first meeting him, Clawson had a silent attitude that made most people walk away thinking he was a cocky coach. In reality, it was just the opposite.

Clawson knew his players, he knew their capabilities on and off the floor. Yes, he expected excellence and more times than not achieved it. Ernie Mac Clawson was a winning coach with a record of 119-96 over eight high school seasons with one district title, but who really knows the impact of his legacy off the court.