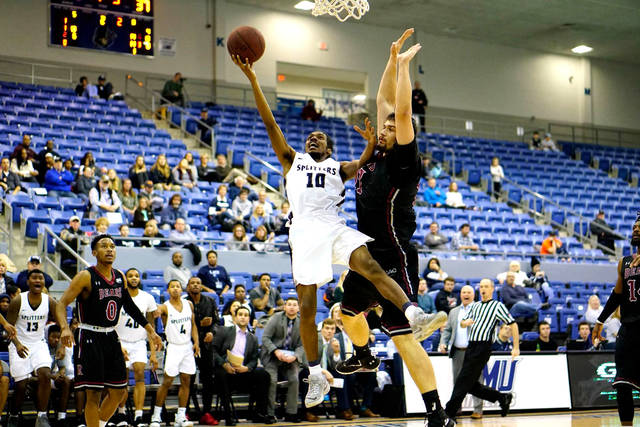 Anthony Brown goes up for a contested layup during a previous game against Lenior-Rhyne. He finished with a team-leading 18 points across 32 minutes of play during Saturday’s loss to the Bears.

HICKORY, N.C. — The Lincoln Memorial men’s basketball team ended the regular-season slate on a sour note with an 85-83 loss at Lenoir-Rhyne on Saturday evening at Shuford Gymnasium in Hickory, N.C.

The Railsplitters (20-8, 14-6 SAC) led by as many as 10 points in the first half and took a three-point lead into the halftime locker room, but the Bears (19-9, 12-8 SAC) used a late 15-4 run to take a 13-point lead with less than 10 minutes to play. Lincoln Memorial rallied back to reclaim the lead with 60 seconds left to play before the Bears made the final push at the free-throw line.

After taking the lead late, the Railsplitters came up empty on their final two possessions and failed to get off a shot before the buzzer sounded to drop their second consecutive game for the third time this season. The loss snapped Lincoln Memorial’s 18-game winning streak in the series that dated back to January 2011.

“Obviously this is a real disappointing ending for us,” said LMU head coach Josh Schertz. “There are a lot of things we could have done better, not the least of which would have been not being a sieve defensively. Just like our last game, it came down to the final play, but in the end we just have to a better job of coaching and playing.”

The loss dropped Lincoln Memorial into a tie for second place in the final South Atlantic Conference standings, but Catawba earned the No. 2 seed for the upcoming SAC tournament via the tie-breaker scenarios. The Railsplitters will be the three-seed and are set to host No. 6 Wingate in the SAC tournament quarterfinals at 7 p.m. on Wednesday.

The Railsplitters were solid offensively, converting 48 percent of their shot attempts while going 18-for-22 at the free-throw line. However, Lincoln Memorial had no answer for Lenoir-Rhyne, which shot 47 percent and went to the charity stripe 28 times. LMU was outrebounded 37-35 and surrendered 11 offensive boards.

Anthony Brown led the way with 18 points on 8-for-13 shooting, seven rebounds and three assists, while Cornelius Taylor had 17 points and eight points, though he finished 6-for-14 from the field. Courvoisier McCauley chipped in 16 points, while Cameron Henry had 11 points and four boards. Kamaran Calhoun accounted for eight points and four rebounds before fouling out.

The Railsplitters had a chance to build a big halftime lead after Taylor buried a 3-pointer at the two-minute mark that made it a 41-34 game. However, the Bears finished the half with a 6-2 run to cut the halftime deficit to 43-40.

The two teams continued to battle back and forth in the second half, as a 3-pointer from McCauley cut the slim Lenoir-Rhyne lead to 59-58 with 13:12 left to play.

But the Bears promptly reeled off eight unanswered points after that as part of a larger 15-4 spurt that put the home team in front 74-61 with less than 10 minutes to play.

The Railsplitters steadily worked their way back into the game, as buckets from Henry and Brown closed the gap to 75-68 with 7:16 to go, while a basket from Steven Perriere made it 75-70 less than two minutes later.

Lenoir-Rhyne answered to extend the lead back to seven until Taylor converted back-to-back shots to pull the Railsplitters back within two at 79-77 with 3:14 left.

The Bears continued to hold the Railsplitters at bay until two free throws from Perriere, a bucket by Brown and a contested jumper from McCauley suddenly saw Lincoln Memorial take an 83-82 lead with 1:01 left on the clock.

The Railsplitters’ lead was short-lived, though, as Diallo was fouled on the next possession and converted both free throws to put L-R back in the lead, 84-83 with 40 seconds to go. Davion Bradford tacked on one more at the free-throw line with 20 seconds left.

After LMU came up empty on its next possession, Thomas missed two free throws to give the Railsplitters an opening, but they were unable to get a shot off as the Bears escaped with the victory.