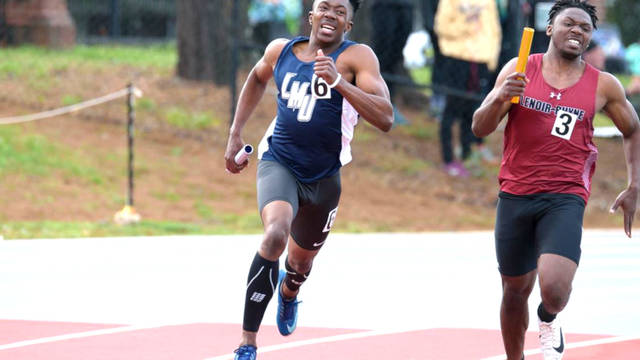 Freshman Jaeden Douglass led the way with a pair of medals, finishing second in the men’s 400-meter dash and anchoring the men’s 4×400 relay. On the women’s side, Jalesia Tillman finished in third place in the 100-meter dash, and the 4×400 team picked up the bronze medal in school-record fashion.

Sophomore Kyle Nabe became the first LMU athlete to compete in the decathlon, earning an overall fourth place finish in the event. Over the two-day competition, Nabe broke two school records and set the new standard in three events: high jump, discus and pole vault. Nabe competed in the pole vault and discus for the first time in his two-year LMU career. His fourth place finish came behind a trio of seasoned decathlon athletes, and he fell just 37 points short of earning a bronze medal.

“We got points where we didn’t expect to get any,” Director of Track & Field and Cross Country Rochelle Black said. “And looking at Kyle, he really outperformed himself and shocked some other people in the conference in just the pole vault.

“I’m very happy and excited in how the team did,” he continued. “I told them that if we compete like we did today there is no telling how much better they can do.”

Douglass set the tone taking second in the 400-meter dash and then came back to anchor the most exciting race of the day, the 4×400, grabbing second place while finishing just six one hundredths of a second out of the gold. Jamaal Wiggins, Miguel Reis and Roberto Fajardo ran the first three legs and put Douglass in position for the dramatic finish at the wire.

“When Jaeden came in we said he could be faster than Oluwatosin Balogun,” said Black. “He has had some setbacks but came back and got second in the 400 and ran the anchor leg in the 4×400 for second. Can’t be disappointed in that at all.”

Senior Brandon Vaughn ran his last race as a Railsplitter in the 1500-meter run and shaved a full five seconds off the school record, finishing in sixth with a mark of 4:01.42.

“I was very excited to see how Brandon ran today,” Distance Coach Jeremy Donahue said. “He was challenging the podium spot against a very good field in that 1500. Over the course of his career, he has battled many injuries and we could never see what he could do. This outdoor season we got to see what he was capable of doing.

“We had a lot of personal bests run today,” Donahue added. “Some were just outside the points but I’m happy to see the improvement all around today.”

In the 800-meter run, Fajardo finished sixth with a time of 1:57.26. Sam Lloyd-Perkins came up just short of the points again, finishing 10th in the 5000-meter run. Thursday, he finished ninth in the 10,000 meter, missing scoring by one place. Jacob Gatewood finished just behind Lloyd-Perk in the 5K at 11th.

“Sam is right on the cusp,” Donahue said. “We are happy to have one more year to work with him. I see areas where he can probably make the jump next year. I see some things we can work on and think he can have a really big year next year.”

The women put forth a strong performance on Saturday as well.

Tillman medaled in the 100-meter race with a third-place finish and was the anchor for the 4×100 team with Grace Mathis, Jerrica Covington and Jordan Crawford that finished fifth.

The 4×400 team capped off the day, finishing third and setting a new school mark with a time of 3:59.77. Kate Zander, Covington, Anna Verdu Cobo and Crawford picked up the bronze medals.

“We have three girls that have run under 60 seconds in the 400,” said Black. “There is no reason why we can’t run under four minutes as a team. I want them to do that more often so the result is not a new feeling.”

Covington provided scoring in the 400-meter dash, finishing seventh and Tabea Kandlbauer ran personal best 5000 meters, finishing fifth in 18:29.46. In the triple jump, Morgan Salyers finished just off the podium in fifth with a jump of 10.87 meters.

“We have waited all year to see Tabea run and we finally got a chance today against some of the best distance runners in the conference,” Donahue said.

“It has been a very interesting outdoor season,” Black said. “On the women’s side we have all of our girls returning. We have to continue to grow because we are in a very deep conference and we showed that we could compete in several events. We have to grow in confidence and grow in numbers so what we saw today will not be a once a season thing.

“On the men’s side it is the same thing,” he concluded. “Sad to see Brandon go, but happy to see how he has run these last few days, not only in the 1500 but in the 800, where he finished with a personal best.

“I want to see if people returning like Sam and Jacob can take that step up and do better than what they did this year,” Black said. “I don’t want anyone to rest on what they have done. Take the summer to decompress, continue training and come back ready to do better than we did today.”