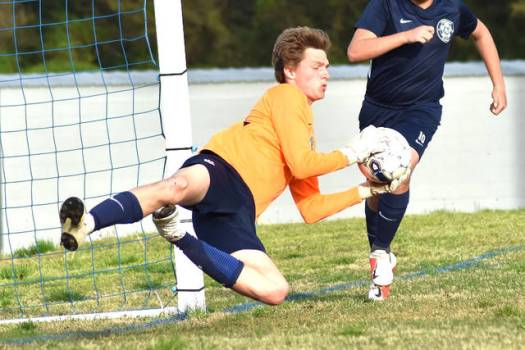 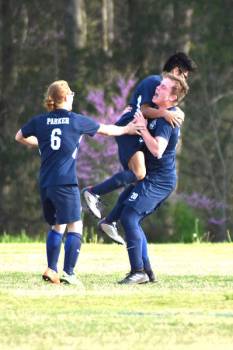 <p>Allen Earl | Claiborne Progress</p> <p>Thomas Ruiz jumps in the arms of a teammate after scoring a first half goal.</p>

The 3-1 in-district Claiborne Bulldogs soccer team came into their April 18 district meeting with Cherokee with the hope of being the sole team at the top of the standings. The Bulldogs defeated Cherokee earlier this season 4-1, so they had high hopes coming in.

This team has redefined what is expected from Bulldogs soccer and ever since head coach Jason Mustard tweaked his recipe by placing Grayson Howard in goal, the team has responded with wins. There is excitement in the air surrounding the 2019 Bulldogs as they end the season and enter tournament play. However, it was Cherokee that kicked the opening goal in at 18’-11”.

At 6’-24,” Thomas Ruiz tied it up with a long shot from wide left. Seconds later Howard made a diving save that got the home crowd making even more noise. The first 40 minutes ended tied at one.

Claiborne came out of the break and had a streak of bad touches that allowed the Chiefs to play near the Bulldogs net. As the game reached the midpoint of the second, Claiborne had a few chances themselves but just wasn’t able to find the net. Ruiz missed a shot around 12 minutes remaining and Cherokee missed one as well with nine minutes left.

Cherokee broke the tie at the 3’-52” mark placing the pressure back on the Bulldogs. At 1’-09” the insurance goal was delivered giving the visitors a 3-1 victory.

After the game, Mustard was confused about how his team played.

“I don’t know who these guys were tonight,” said the Bulldog coach. “They played like a different team, and I would be very wealthy if I could get in the heads of a high school player.”