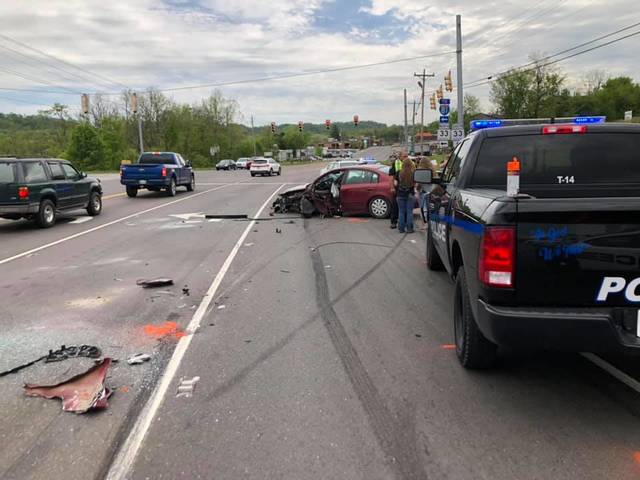 A high-speed chase in a stolen car ends in a multiple vehicle collision on Hwy. 25E. The stolen car received major damage in the wreck.

A Tazewell teen is in jail after creating havoc on Hwy. 25E with a stolen vehicle. Jeremy Sulfridge, 19, allegedly stole a maroon Nissan Maxima from the United Grocery Outlet parking lot on April 27 and sped around town before being spotted by Tazewell police officer Isaac Cline near the Dogwood Heights community.

According to the press release, Sulfridge was traveling southbound at a high rate of speed, passing vehicles through the center turning lane.

Radar detected the subject’s car was moving at a speed of 82 miles per hour inside a 45 mph speed zone. The officer attempted to catch up with the car but, due to the high rate of speed and erratic driving, was unable to get close enough to read the license plate, according to the press release.

Tazewell officer Jason Pabon, who was near the intersection of Hwy. 25E and Cedar Fork Road, spotted the speeding car and joined in the chase that took a quick left onto Old Hwy. 25E. Sulfridge continued to evade the officers as he turned across the parking lot of England Furniture and back onto the highway.

According to the press release, the officers lost sight of the vehicle near Southern Outdoors and radioed ahead, requesting assistance from the New Tazewell Police and the Claiborne Sheriff’s Office.

“As the officers came around the curve, they observed that the fleeing vehicle had struck a semi-truck trailer in the rear, which was stopped at the traffic light along with other cars. The drivers of all vehicles were miraculously uninjured,” reads the release, in part.

Sulfridge was taken into custody and charged with three counts of reckless endangerment and one count each of felony evading arrest, reckless driving, speeding 82/45, theft of property over $1,000 (motor vehicle), failure to exercise due care, driving left of center roadway and driving on a revoked license.

The press release states that, according to witnesses, the vehicle allegedly stolen by Sulfridge was driving erratically long before coming into contact with law enforcement.

Tazewell police chief Jeremy Myers requested that the Tennessee Highway Patrol work the accident due to the involvement in the case of the three law enforcement agencies.