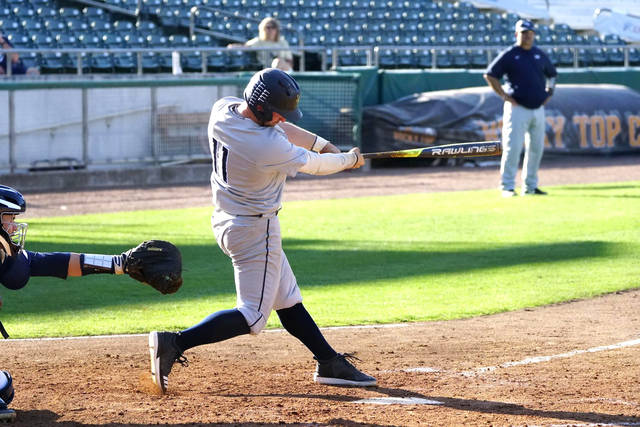 The fifth-seeded Wingate Bulldogs exacted some revenge to deny the second-seeded Railsplitters in their quest for a third straight South Atlantic Conference tournament title.

KODAK, Tenn. — The fifth-seeded Wingate Bulldogs exacted some revenge to deny the second-seeded Railsplitters in their quest for a third straight South Atlantic Conference tournament title.

Two days after suffering a 6-0 loss to Lincoln Memorial to fall into the loser’s bracket, the Bulldogs rebounded to eliminate the Railsplitters from the SAC tournament with a 10-2 win at Smokies Stadium on Sunday evening.

After being shutout and limited to just five hits in an 8-0 loss to Catawba on Saturday night to stumble into the loser’s bracket themselves, Lincoln Memorial (33-17) again was unable to muster any offensive attack, as a trio of Wingate pitchers combined to allow just four hits while striking out 10.

With the loss, the Railsplitters will now have to sit and wait to see if they earn a bid to the NCAA Division II Baseball Championship. The top six teams from the Southeast Region will be selected to participate and Lincoln Memorial was ranked No. 6 in the initial rankings that were released earlier this week. The NCAA is set to announce the field on May 12.

Wingate, meanwhile, advances to face Newberry in another elimination game on Sunday night. The winner of that game will take on Catawba for the SAC tournament title on Monday.

Tyler Adams went 2-for-3 with a double and two RBI, while the rest of the team finished a combined 2-for-28 at the plate. Seth Hunt had a double, three walks and scored two runs, while Nate Stinson had the only other hit of the game for the Railsplitters.

On the other side of the spectrum, the Bulldogs scattered 14 hits and saw four players produce multiple hits. Wingate also struck out only three times.

Nick Stegman baffled the Railsplitters over 6.2 innings of work, surrendering just three hits with seven strikeouts, though he walked six batters. Sawyer Lee got the biggest out of the game for the Bulldogs in the top of the seventh inning when he struck out Brent Richey with the bases loaded to keep Wingate in front 8-1.

Lane Wildman pitched the final two innings for Wingate, giving up just one hit and one run while striking out two.

The Railsplitters got off to a fast start, as Hunt drew a leadoff walk and Alex Allen was hit by a pitch to put two on with no outs in the top of the first for Adams, who delivered an RBI double to right center.

However, Lincoln Memorial was unable to push another run across as Stegman struck out Chris Salvey and Stinson, and induced a groundout from Richey to end the threat.

The Bulldogs then proceeded to score 10 unanswered runs after that, beginning with Andrew Llewellyn’s two-out RBI single in the first.

In the third, a two-out error opened the door for Wingate to take the lead as Bryant reached via the infield miscue before Schneider doubled him home in the next at-bat.

Forry’s no-doubt leadoff homer in the bottom of the fourth put another run on the board for the Bulldogs before Wingate exploded for five runs in the fifth.

Mellett got the scoring started with a two-run homer before Schneider sparked another rally with a single two batters later. Another error then put two runners on and the Bulldogs capitalized on that opportunity with an RBI double from Hunter Dula and a two-run single from Clark.

The Railsplitters had several chances after falling behind 8-1.

In the top of the sixth, Stinson led off with a single and Will Reddick walked before a wild pitch put both runners in scoring position. However, a groundout ended the threat.

LMU then loaded the bases in the seventh after Adams singled, Salvey reached via an error and Stinson walked, all with two outs. However, Lee’s strikeout of Richey again kept the Railsplitters off the board.

Wingate then put the game out of reach in the eighth, pushing two more runs across on a double from Zach Little and a single from Bryant.

The Railsplitters scraped for a run in the ninth as Hunt led off with a double and scored two batters later on Adams’ sac fly, but that was the extent of the offensive output.