Bulldogs baseball even the series with Panthers 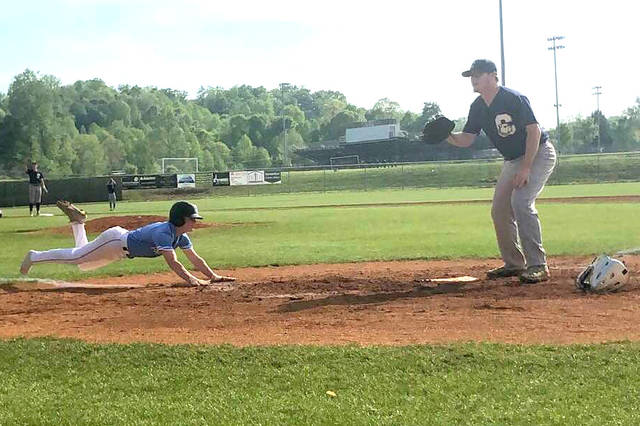 “Jerry” Cannon with a head first slide into home as Jacob Wilson covers the plate.

Claiborne went to the land of the Panthers April 30 for the second of a two-game regular season baseball series. The Panthers defeated Claiborne during the first meeting 9-3 the previous day, and the Bulldogs were trying to even the series. Oddly enough the score at the end of this game was once again 9-3 but the results were not the same.

Claiborne jumped on the Panthers early and put up a run during the first inning of play, but the Panthers dropped two runs on the visitors during the second inning to take the lead.

During the third inning, the Panthers scored again and increased their lead to 3-1. Not to be outdone, the Bulldogs scored one run in the top of the fourth, but it was during the fifth inning where the Bulldogs pulled away by placing four runs on the board. They added three more during the final two innings to basically secure the win.

Chase Foster looked great at the plate for the Bulldogs by going 3-for-4 at the plate with two RBI. Daniel Atkins and Hadyn Hollin also had multiple hits.

Claiborne placed Ryley Hager on the mound, and he tossed over three innings giving up three hits. Jacob Wilson tossed 3 1/3 innings and gave up six hits.

The Panthers were led at the plate by Brady Pearman, Jeremiah Cannon, Peyton Wilder and Matthew Massengill. Wilder and Massengill each had an RBI. Cannon and Wilder also shared time on the mound and each had two strikeouts.

It was much like game one, but the score was just reversed. The teams later found out they would meet again this time in the Blue Ridge Athletic Conference Tournament on the campus of Carson Newman, scheduled for May 4.

Panther defeat Bulldogs in game one