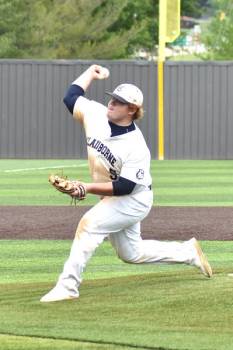 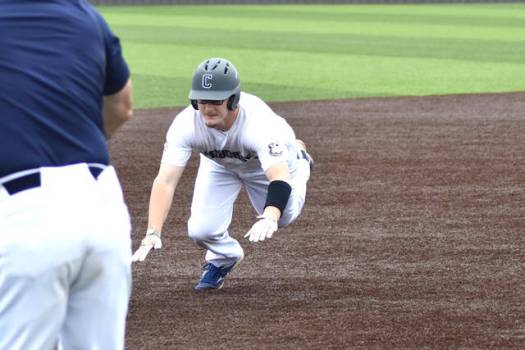 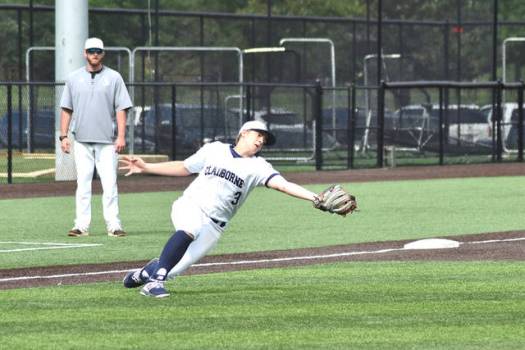 <p>Allen Earl | Claiborne Progress</p> <p>Chase Foster didn’t see this softly hit fly ball at first but made a great recovery for the out.</p>

The threat of inclement weather postponed the first round of the 2019 Blue Ridge Athletic Conference baseball tournament at Carson Newman to May 5.

On a rare Sunday baseball game for the high school players, the two rivals met again just days after splitting wins. The score of both games was 9-0, and the fans were excited to see the rubber game.

When the game got underway, Alex Boling singled with one out and Chase Foster singled Boling to third. With two on, Ryley Hager recorded an RBI by forcing a throw to first giving Claiborne the first lead at 1-0.

Gage Callebs made out number three at first.

During the Panthers bottom of the first, Holdin McDaniel led off with a single but was erased at first on a pick off move by Hager who was on the mound for the Bulldogs. With two outs, Brady Pearman was hit by a pitch and Darin Robertson reached on a walk. Peyton Wilder hit an RBI single tying the game at one. Jeremiah Cannon flew out to center field ending the inning.

During the Cumberland Gap bottom of the second, a Matthew Massengill lead-off single ripped down the third-base line. McDaniel singled putting two potential runs on the bases for Noah Robertson. Hager got him to hit a ground out ending the threat.

The Bulldogs went three up and three down to start the third.

The bottom of the third saw Pearman single, Robertson hit a fielder’s choice, and then Hollin touched second and he then threw to first for a double play to end the inning.

The Bulldogs went down in order during the top of the fourth and the Panthers had two base on balls that sent coach Stephen Foster to the mound for a pitcher change to Boling. The Bulldogs got out of the inning with no damage; however, the Panthers left two on base.

Claiborne combined efforts on a Boling single and a Foster RBI single down the first-base line increasing the score to 4-1.

The Panthers went three up and three down during the bottom of the fifth.

During the top of the sixth, the Bulldogs went three up and three down as well.

The Panthers bottom of the sixth saw Cannon hit a one out single. Chase Foster made a great play at third for the second out, and then Murphy gave the ball a ride to center field for out three.

Claiborne had two outs in the top of the seventh inning when Boling continued to have his career day. He hit a triple but his team left him on base.

The Panthers were down to their final three outs. Kolby Bean reached on a walk but was stranded when Hager hustled out of the catcher’s position and caught a fly ball for the final out. With the 4-1 win, the Bulldogs continue on in the BRAC tournament will the Panthers season ended.