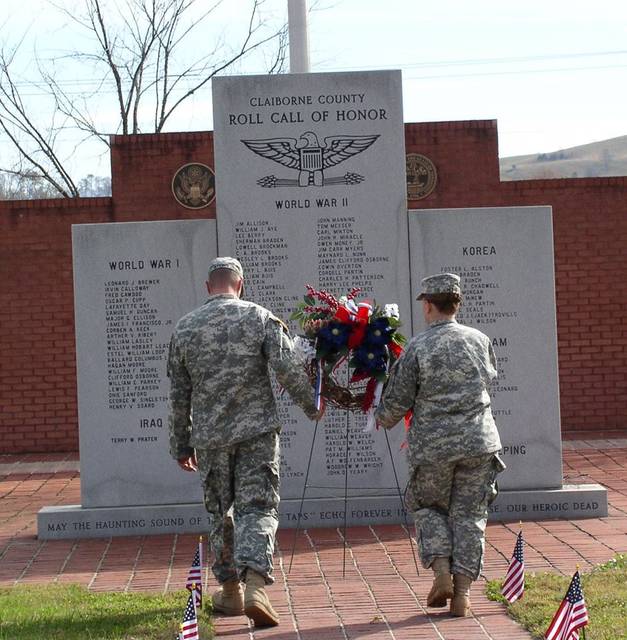 The Roll Call of Honor, located in the Rome Cardwell Park in Tazewell, lists the names of those Claiborne County natives who gave the ultimate during the wars fought by American servicemen.

On May 3, 1915, Lt. Colonel John McCrae sat in the back of an ambulance near Ypres, Belgium and penned the poem that would become the essay of a world war. McCrae hurriedly got down on a scrap of paper his feelings about the death the day before of friend and former student Alexis Helmer.

As he sat, putting word to paper, Sgt. Major Cyril Allinson stopped by the ambulance door and handed a stack of mail to his superior officer. Allinson recalled later standing there, watching McCrae set forth the last passages of the poem.

“His face was very tired but calm as he wrote. He looked around from time to time, his eyes straying to Helmer’s grave,” said Allinson of the incident.

Without a word, McCrae handed the finished poem to Allinson, who later recalled how moved he had been.

McCrae spent 17 arduous days tending to the medical needs of fallen comrades during that second battle at Ypres. He was later transferred to Boulogne No.3 General Hospital to oversee medicine. He worked there until his pneumonia-related death on Jan. 28, 1918, at the age of 45.

McCrae was buried with full military honors in Wimereux Cemetery near Boulogne, France. His family home in Guelph is preserved as a museum, and the main street in Wimereux is now named Rue McCrae.

Canadian poet, soldier and physician, McCrae earned his undergraduate and medical degrees at the University of Toronto, where he received the Gold Medal. He worked at Toronto General, Johns Hopkins, Montreal General and the Royal Victoria in Montreal hospitals. He also worked at the Royal Alexandra Hospital for Infectious Diseases and McGill University.

McCrae was a member of the Royal College of Surgeons and was the first Canadian to be appointed consulting surgeon to the British Army.

He wrote several medical textbooks during his lifetime. His poetry was posthumously gathered into a collection.

The poem, first published in Punch Magazine, went on to honor future generations of servicemen.