<p>Jan Runions|Claiborne Progress</p> <p>Barron Kennedy III accepts the Good Scout Award during a dinner in honor of his decades of service to the Boy Scouts of America.</p> 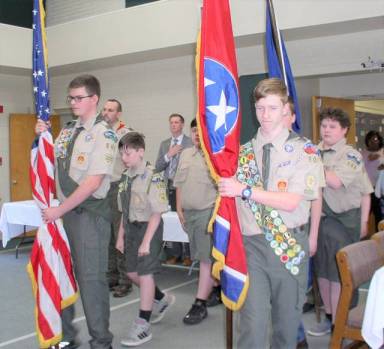 <p>Jan Runions|Claiborne Progress</p> <p>Members of the Boy Scouts of America, Troop #508 present the colors during the dinner to honor its recipient of the Good Scout Award.</p> 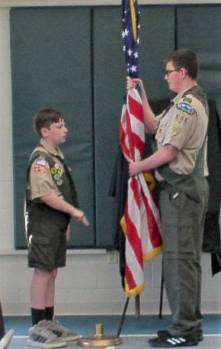 Barron Kennedy III is the recipient of the 2019 Good Scout Award, handed out by the Great Smoky Mountain Council of the Boy Scouts of America each year to those who have proven meritorious service to the organization.

His son, Barron Kennedy IV, presented his father with the award, during the special dinner last week.

“Scouting has been an immensely important part of my life. And, I owe that to dad’s interest in scouting. I used to love reading through his old Boy Scout handbooks, when he was a kid – some of which were his dad’s. Dad spent countless hours volunteering, following me around, helping me with merit badges. It was a very special thing to get to experience it together.

“A lot of people, if they’re lucky, get to know their fathers only as ‘a good dad.’ They only see that side of him. They don’t get to see him and know him as the rest of the world does. But, I’ve been privileged to know dad as both a dad and as a fire chief. I got to see how he treated people. It’s a neat thing to get to appreciate your father not only as a parent, but as a person. I knew how much dad invested in us and how interested he always was in whatever we were doing. To hear perfect strangers say the same things about him is really special,” said Kennedy.

During his acceptance speech, the elder Kennedy spoke of his early experiences with scouting. He said he was unable to move further up the Boy Scout ranks than 2nd Class due to his inability to learn how to swim.

“Our troop had an Indian Dance Team where I participated, and it began a lifelong interest in the Native American way of life. In Lancaster, South Carolina, I was able to work with the Webelos,” said Kennedy, who later earned a spot as a brotherhood member of the Order of the Arrow.

He said he is proud of the Boy Scouts and what being a member can do for young people.

“If you could look at the resumes of many of our nation’s leaders and heroes, you would find a scouting experience. The Scout Oath and Scout Law are truly the building blocks that young people build their lives upon,” said Kennedy.

During his stint as a member of the Tazewell-New Tazewell Fire Department, Kennedy created an explorer post, which his son described as “a unique intersection of two of the most important things” in the fire chief’s life.

Kennedy has had quite the varied career, but seems to have always entered into works that allowed him to give back to the community. He was best-known, locally, in his role as the TNT fire chief, a position he held from 1987 to 2010.

He taught school for a total of 15 years – six of those years at Tazewell-New Tazewell Primary and the remainder at Forge Ridge.

Kennedy was counted among the original dispatchers in 1996, when the county created its Claiborne E-911 system.

In 1992, he was called upon to help local municipalities as a building inspector. He has used his expertise as the go-to guy on all things codes in the cities of Tazewell, New Tazewell, Harrogate, Cumberland Gap, Sneedville and Maynardville.

His career paths include stints as station captain for the Knoxville Rural/Metro Fire Department, secretary and past president of the Tennessee Fire Chiefs’ Association and as a contract instructor for the Tennessee Fire Service and Codes Enforcement Academy.

In 2002, Kennedy was bumped to a staff position as instructor II/regional coordinator for the organization.

He has spent over 50 years in the Scouts and is currently a chartered institution representative for Pack and Troop #508. He is also active on the executive board of the Great Smoky Council and serves on the Council Investment and Endowment Committee. He is also a member of the Council Heritage Society.

Kennedy is a member of the New Tazewell United Methodist Church, where he has served as usher, choir member and chairman of the Administrative Council.