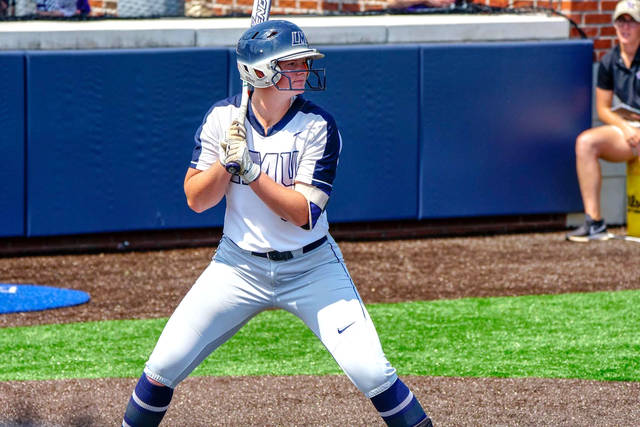 HARROGATE, Tenn. — It’s never easy to say goodbye to a season like the one the Lincoln Memorial University softball team just had.

However, the gut-wrenching moment came Friday afternoon after No. 5-seeded Young Harris roared back in their second consecutive NCAA Division II Softball Super Regional appearance, erasing a six-run deficit with 12 unanswered runs to take the best-of-3 series in a 12-6 game two victory and end the Lady Railsplitters’ historic season on Dorothy Neely Field.

“These are tough conversations to have with your kids when you end up ending the season like we did here,” LMU second-year head coach Ritchie Richardson said. “We did reiterate what a fine season that it has been — a lot of firsts for our softball program. The first thing I said to our kids was look, ‘My expectations are that we are going to be in these kinds of games, and we are going to win them and move on. Let’s establish that before we get to all the cookies and cream, which is all the firsts we’ve experienced this year.’

“First SAC championship, national rankings, region rankings, region tournament, and hosting a super section … it’s been so many firsts, I can’t even think of them all. It’s special. You hope the kids had a good experience this year — I know I did. We love our kids and we’ve enjoyed coaching them this year — and that they’ve built some strong relationships with their teammates and have a lot of stories to tell from the 2019 LMU softball season 10 to 15 years down the road.”

The Lady Railsplitters (38-14) turned it up once the third inning began as Sierra Hucklebee (2-for-3, RBI) crushed their first run of the Supers up and over the left-field wall, handing LMU the quick lead. Savannah Daniel (2-for-3, RBI) continued her impressive Super Regional stay as she drew her third walk of the two-day tournament with the bases loaded to add onto the lead, and then Bella Buccellato reached on a fielder’s choice to make it a 3-nil ballgame.

Ty-Kella Goins extended the inning as she busted a two-RBI single, scoring Daniel and Jacie Pittman (walk) to cap the five-run third inning, which rattled Nikkie Kovalsky (W, 28-11) and forced a pitching change.

LMU added onto its lead in the next frame when Allie Jones doubled, scoring a sliding Emma Webb to make it a six-run advantage, but then the Mountain Lions (42-18) started chipping away. The Mountain Lions, who scored two in the fourth, got to starter Justice Smith in the fifth, knocking across three runs on three hits and a pair of errors that continued the bleeding.

Faith Howe entered with two outs and a one-run lead as she worked the Lady Railsplitters out of inning, but Young Harris got to her in the next frame as Bailey Griffith (L, 16-9) relieved her with the bases loaded and one out.

The Mountain Lions went from there, scoring seven runs on four hits and an error to take the lead for good on Katelynn Hodges’ two-RBI double.

“I thought we were prepared coming into this contest,” Richardson said. “I liked what I saw on our kid’s faces prior to the ballgame. I felt like we would bring a fight today, and we did. There for a while I thought we macerated as champions there. I thought we were feeling it and we were going to get it done, and gosh it just kind of fell apart there. Pretty much every component of the game — we made defensive mistakes, and they got to our pitching, not just one.

“We just failed to execute when we made some moves on the mound there and just snowballed after that. You have to give Young Harris a lot of credit, down 6-0 and momentum clearly in our favor, for them to keep clawing and fighting and put it back together and come back. They have a lot of grit and a team that’s going to do very well in Denver.”