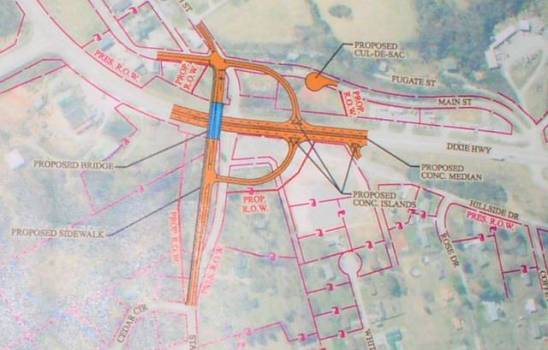 Claiborne residents are being asked to attend a public hearing on June 4 to input suggestions and get answers on the proposed project to improve the Cedar Fork/U.S. 25E intersection.

The project has been on the burner for quite some time. It has been brought to the forefront recently via a nudge by county officials and a visit on May 14 with the Tennessee Department of Transportation (TDOT).

County Mayor Joe Brooks updated the Claiborne Commission during its regular monthly meeting. Brooks said he and Ronnie Pittman, county road superintendent, were a bit disappointed that TDOT had chosen to go with one of the two proposed project concepts they feel would not adequately address traffic congestion.

Brooks said he understood that part of the reason for TDOT choosing the alternate concept was due to a reticence on the part of Roger Ball to relinquish a piece of property.

“The reason why they were going to do the original concept is because of cost,” said Brooks.

He said he and Pittman had asked whether, down the road, the project to straighten a curve could be tied into the original concept.

“We were told there would be an ‘S’ curve in the road to make those two match up, in the future, if that project was ever done. So, we were not impressed in being told that.

“Once this is done, if they do it the way they (TDOT plans to do it) and you’re going north, you’re going to come off Cedar Fork and make a right hand turn, and have another hard 90 to go north or a hard 90 to go south. And, that is not going to do anything to help traffic then what we already have,” said Brooks.

According to TDOT’s executive project summary, the preferred concept will allow for a smaller footprint than would a traditional diamond interchange. In this concept, Cedar Fork Road would be raised and separated from U.S. 25E. Construction would be made easier by moving the horizontal alignment south. The intersection at U.S. 25E would be “right in, right out” only. A raised concrete median will be added, as well.

This will eliminate the left-turn conflict point when negotiating off the highway, according to the summary.

Cedar Fork Road will have two travel lanes, turn lanes at intersections and curb, gutter and sidewalk along the south side.

The summary states that the simple diamond interchange (preferred by Pittman and Brooks) was not considered by TDOT due to costs, concerns with loss of access and a lack of overall consistency with the surrounding roadway network.

The public hearing is scheduled for June 4, from 5 p.m. to 7 p.m., inside the large courtroom of the Claiborne Courthouse. Claiborne residents are urged to attend this meeting.