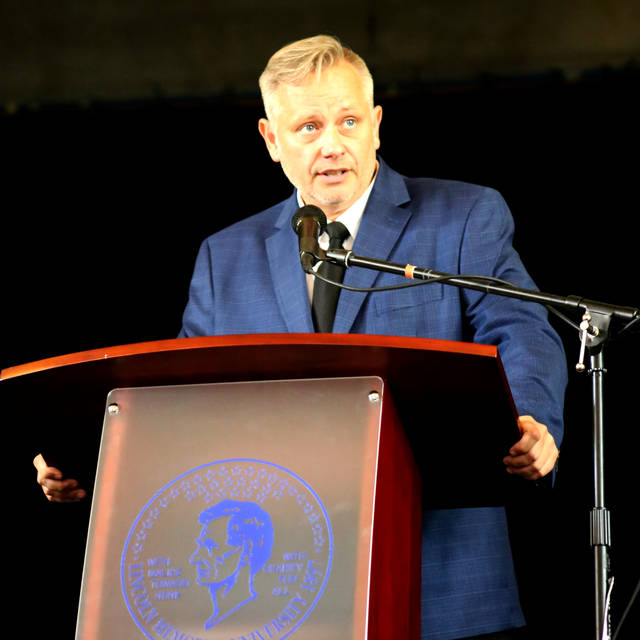 Bobby Lockhart is the new principal at J.Frank White Academy.

Jody Goins, VP for Enrollment, Athletics and Public Relations, has appointed interim principal Bobby Lockhart as the principal of the J. Frank White Academy (JFWA). Lockhart has served the school for 23 years in numerous roles including assistant principal, athletic director, English and economics instructor, as well as coach for tennis, basketball and cross country. He takes the helm as the Academy expands to grades K-12.

“My career at the Academy has brought me so many amazing experiences,” said Lockhart. “I’m thankful for all the roles I have played in the history of our school and I’m looking forward to the next chapter as we continue to grow.”

Lockhart officially assumed command this spring as JFWA prepares for the addition of grades K-3 in fall 2019. JFWA’s current enrollment is 145 students in grades four through 12.

“We have a very special learning environment at the Academy, and my vision is to continue to nurture a culture that enhances educational growth opportunities for every student,” said Lockhart.

He has earned two undergraduate degrees from LMU in accounting (1991) and English (1994). Lockhart earned his Master of Arts in English Language and Literature from Western Kentucky University in 1999 and his EdS in Educational Leadership from LMU in 2017.

Chris Stotts will serve as assistant principal, STEM coordinator, AP coordinator and lower-school designee. Stotts has served the Academy as a chemistry instructor and STEM coordinator during his nine-year tenure. He is a three-time graduate of LMU with a bachelor’s degree in biology, an MEd in Curriculum and Instruction and an EdS in Educational Leadership and Administration. He is currently working toward his doctorate in education at LMU.

Delaina Rhodes will serve as assistant principal in charge of curriculum, teacher licensure, event-planning and travel logistics. Rhodes has served the Academy as a social studies instructor and curriculum coordinator during her 14-year tenure. She earned a bachelor’s degree in History with a minor in Religious Studies, from the University of Tennessee, and an MEd in Curriculum and Instruction and an EdS in Instructional Leadership from LMU.

Cory Cheek has been named the director of admissions in addition to his duties as athletic director and head coach of boys basketball. He has worked at JFWA six years and has served as history instructor. Cheek graduated from LMU with a bachelor’s degree in history and earned teacher licensure in 2016.

The Academy is a college preparatory school accredited by AdvancEd. JFWA offers small class sizes and access to LMU facilities and resources including the Carnegie-Vincent Library, Tex Turner Arena, advanced science labs, dining hall and athletic fields. Since its founding in 1989, the Academy has boasted a 100 percent college placement rate. Academy students achieve higher than average scores on state and national standardized tests such as the ACT.

JFWA is located at the center of LMU on the Campus Quadrangle in historic Farr-Chinnock Hall. Nearby Kresge Hall is under renovation to serve the needs of the lower grades.

JFWA is now accepting applications for grades K-12 for fall 2019. For more information contact Cheek at Cory.Cheek@LMUnet.edu or apply online at JFWA.LMUnet.edu.