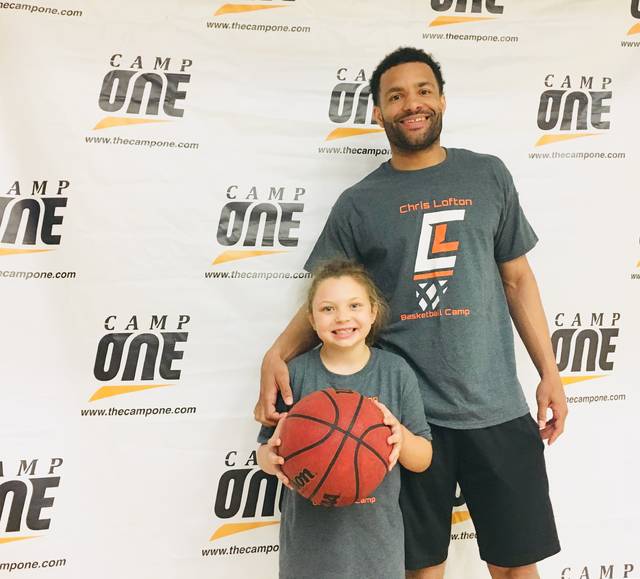 Former Tennessee basketball standout guard Chris Lofton held his fifth annual Rocky Top Skills Camp at Alcoa High School on June 6. The camp was for both boys and girls and featured a multitude of drills and competitions. Lofton was assisted by Julius King and Jason Thompson during the camp.

“This place is very special to me,” said Lofton. “Knoxville and the greater Knoxville area will always hold a special place in my heart. Coming from Kentucky, playing high school basketball and not having many division one offers, for the University of Tennessee to take a chance on me made this place my second home. I love coming back here and doing this camp.”

Comparing the Alcoa location to a few of the other locations he has put on the camp, Lofton sees a lot of talent in the region. “Knoxville has a lot of talent,” said Lofton. “I was actually just telling someone earlier that this group of girls’ that came out for this camp are going to be special. They are really good and you don’t see that a lot at this age level. There’s a lot of talent down here for both boys and girls. Hopefully we can teach them a few things to help them be even better.”

In keeping with the Volunteer spirit, Lofton says that community support for his camp has been tremendous. “The community has been great. We did the camp a little earlier this season because I was back stateside a little bit earlier than last time. I’m very thankful to all of the parents and people that have helped us put this thing together. I’m very appreciative of Alcoa High School for letting us use this nice gym as well. This area and this community is amazing. Hopefully we can continue to come back and do this every year.”

After spending two months in Seoul, South Korea with the SK Knights, campers were excited to pick Lofton’s brain about his overseas experiences. “A lot of them were asking me questions about the differences in basketball over there and over here. They asked me about some of the other players that I had played against and with overseas that are in the NBA and stuff like that. The older kids were asking some really good questions about it that made me think a little bit. It’s nice to see how interested they are in the game at all levels.”

In his first trip to the continent, Lofton says that playing basketball in Asia was a wonderful experience. “I was only playing over there for two months, but it was awesome.” said Lofton. “They had a player get hurt and I replaced him for the rest of the season. They had a lot of injuries on the team this season to a lot of the Korean players. With the rules over there, you have to have your Korean players. That was my first time in Asia and I loved it. I got to meet a lot of new people, made some new friends and got to experience Korean culture.”

With the Volunteers having a historic season in 2018, Lofton thinks the Vols are headed in the right direction. During his time with Tennessee, Lofton played in 128 games and averaged 16.6 points per game throughout his career, including an SEC-leading 20.8 points per game in 06-07.

Lofton holds the SEC record for 3-pointers made, with 431 on 42 percent shooting. Lofton was named SEC Player of the Year in 06-7. He was also a two time consensus All-American, named to the SEC All-Conference team three times and was named to the All-Freshman team in his rookie campaign with the big orange.

“That was an amazing team,” said Lofton. “They had an amazing year. It didn’t end the way we wanted it to, but what they did this year for the school, the fans and us alumni, was very special. It was very fun to watch them play. They were always competitive and played as a team, it was great to watch.”

“I like Rick (Barnes),” said Lofton. “He’s a tough coach and he gets the most out of his players. He’s going to make sure you play hard, practice hard and are ready come game time. He’s known for having tough teams. You’re going to play defense and rebound if you play for him. I think we are going to be a lot better than what people think this season.

“Everybody thinks we lost everything last year in losing Grant (Williams), Jordan (Bone) and Kyle (Alexander), but coach Barnes and his staff will put a game plan together to compliment the team we have and run the offense that is best suited for those guys to be successful. I have the utmost faith in them this season.”