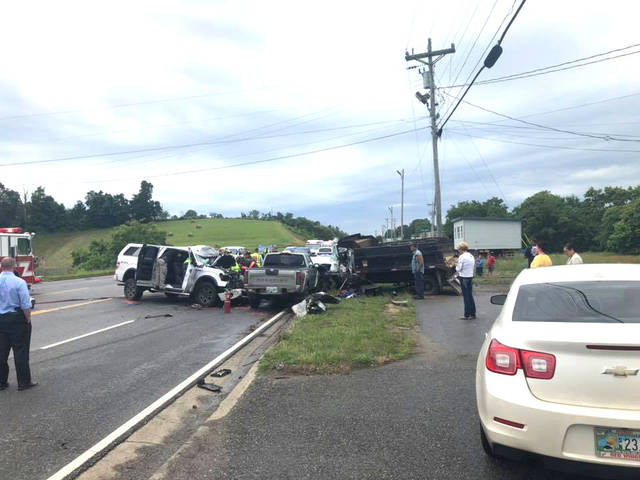 The Tazewell Police and other law enforcement agencies work a four-vehicle pileup at U.S. 25E and Fairview Road.

The death on June 10 of a four-month-old Cave Springs infant continues to be under investigation, according to Claiborne County Sheriff’s Office Sgt. Jason Henagar. Law enforcement is awaiting the results of an autopsy to determine just what caused the infant to suddenly stop breathing.

Emergency personnel arrived on scene shortly after the E-911 call that came in at 1:20 p.m. However, attempts to resuscitate the infant were unsuccessful.

Henagar said that law enforcement is also waiting on the results of additional evidence collected during the early stages of the case and scouring information from interviews done at the scene.

“It could be months before this case is closed,” said Henagar.

Claiborne Sheriff Bobby Brooks said in a press release that these types of calls are “heartbreaking for any and all personnel involved.”

Two multi-vehicle accidents brought traffic to a standstill this week, as law enforcement worked to open lanes mired in twisted metal. The more serious accident involved the collision of four vehicles on U.S. 25E and Fairview Road, near Lester Signs.

Tazewell Police Chief Jeremy Myers said in a press release that his department is “thankful there were no fatalities.” He added that he hoped all involved will “recover well.”

Myers said in his press release that the Tennessee Highway Patrol will be working this accident due to its complexity.

The second accident, which occurred the morning of June 14, involved two vehicles with injuries. The wreck occurred near the New Tazewell Walgreen’s.

According to the press release, no one was cited in this accident.

It appears the NTPD is cracking down on those who illegally use handicapped parking spaces. Patrol cars are stepping up their cruising as they tighten inspections for required disabled placards.

July 1 is the cutoff date for those who insist on cradling a cell phone in hand while driving. Anyone caught doing so will be facing some stiff fines and loss of time while law enforcement makes out your ticket.

The Tennessee Bureau of Investigation has released a study showing a 28 percent increase since 2015 in the number of law enforcement officers who have been assaulted or killed within the line of duty. That percentage equates to more than 2,300 officers who have been victimized by certain members of the public.