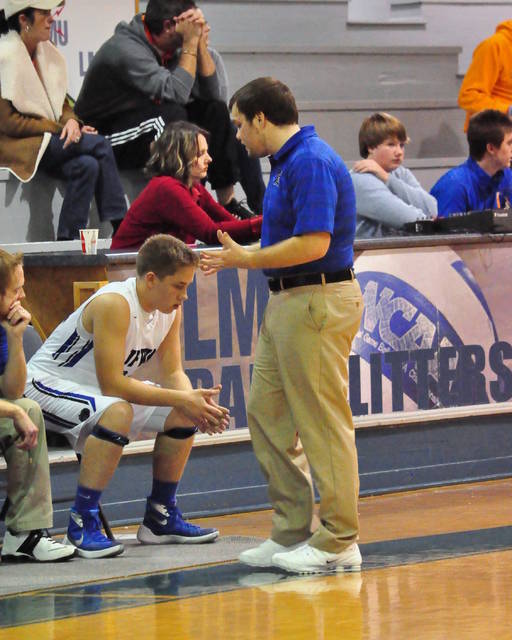 Coach Cory Cheek talks to the team at JFWA during the 2015-16 season.

The Panthers basketball players finally got the news they were looking for June 20. After six seasons as coach at J. Frank White Academy, Cory Cheek returned home to Cumberland Gap and was introduced as the new head basketball coach.

During his tenure with the Knights, Cheek coached and for three years served as athletic director. He has several milestones with the Knights including 70 wins. He also led his team to a school record 22 wins last season against six losses. They finished the season as N.A.C.A. runner-up and won several classics.

Cheek wanted to thank JFWA for the opportunity to be part of their program and said this, “First, I’d like to thank them for trusting a 21-year-old kid to be their coach. Secondly, I have to thank them for helping mold me professionally. I worked with and around the best people and gaining the experience as athletic director was an honor. I loved every single moment there.”

Cheek played basketball at Cumberland Gap from 2005-2009 and then went to Maryville and broke records there as a player. He returns home with big expectations, but he wants the fan base to look at the product on the court and not the record or number of championships.

Cheek knows that the job will be a challenge, and he took a moment to speak about it, “We are going to play defense at an elite level and press as much as we can. I want us to rebound well and keep a fast upbeat tempo while on offense. I expect us to score early in the game and often. I want to give the players freedom to move and react to things happening on the court.”

This type of basketball will be more of the same for players coming in since Brandon Clawson at H.Y. Livesay will be sending players to high school that play that style now.

“I can tell the fans now that my goal for our team is to never be out-hustled,” said Cheek. “I am just so happy to be coming back home, I am excited, extremely excited to be here. I met the team today and we have some great athletes, which makes me even more excited to begin working with the them.”

It will be a couple weeks before the team reassembles with coach Cheek as the two-week dead period is now in effect.