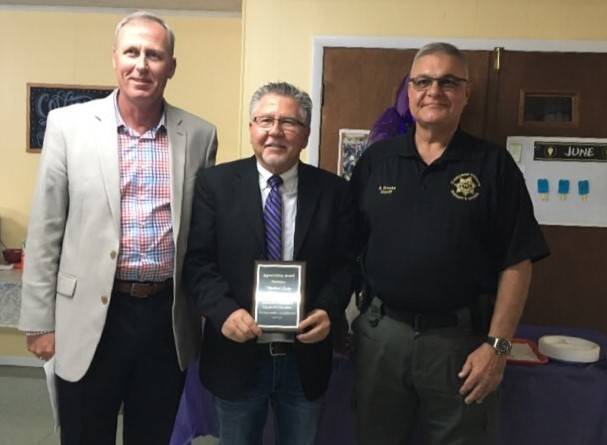 As the general population ages, elder abuse is becoming a topic of concern. This month, the Office on Aging is recognizing those who continue to aid and comfort older citizens who have experienced physical, sexual, emotional and other forms of abuse.

Michael Cosby, who is the Adult Protective Service officer for Claiborne County, was recognized for his 20 years in the trenches.

Cosby received a plaque of appreciation during a ceremony held recently at the Senior Citizens Center in Tazewell. Those who attended learned about the different forms of elder abuse and how to go about contacting the appropriate agencies for assistance.

About one in every 10 U.S. citizens aged 60 or older have experienced some form of elder abuse – some 60 percent of which were perpetrated by family members. According to the latest statistics, social isolation and mental impairment due to dementia or Alzheimer’s disease were noted as the top two factors leading to elder abuse.

Adding to the equation is the downward trending of the economy and the subsequent “returning to the nest” of children and grandchildren who cannot afford to live on their own. This situation many times creates a breeding ground for elder abuse.

Those who must enter nursing homes and other assisted living facilities find themselves at the mercy of the staff. There is a marked upswing in the number of elders who are being abused by those who are tasked with caring for these vulnerable residents.

There are many ways the older population is abused. Besides physical, sexual and emotional, many elders are finding themselves confined in isolation, neglected and financially exploited. Many older adults are being deprived of medical care, food and shelter as well.

Some of the warning signs are easily detected. Bruises, broken bones and burns are evident. If an elder suddenly withdraws from normal activities or exhibits changes in alertness or unusual depression, that person could very well have been abused.

Neglect can be detected by the presence of bedsores, poor hygiene, unusual weight loss or the apparent withholding of medicine and medical needs.

You are likely witnessing verbal or emotional abuse by caregivers who belittle, threaten or use other expressions of power and control.

In its June meeting, the Claiborne Commission unanimously adopted a resolution addressing elder abuse. The resolution states that those over 60 years of age should be afforded the same rights and considerations as that of any other demographic.

The document lists actions that should be taken by those who witness or suspect any type of elder abuse. Calling E-911, local police and the local district attorney general would be a first step.

Filing a complaint with Adult Protective Services is another way in which individuals can insure that older citizens are protected.