Can turkey poults survive all the wet weather 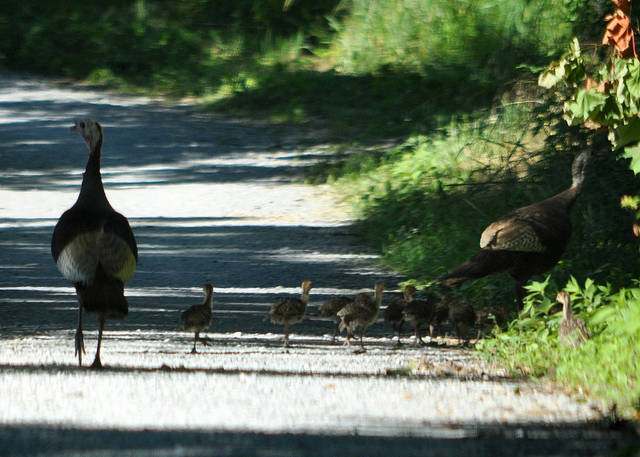 Turkey populations may be impacted by the cooler, wetter key months inclement weather during hatching season.

We all know how wet this spring and early summer was. Turkey populations may be impacted by the cooler, wetter key months inclement weather during hatching season.

It seemed right on cue that the days of wet weather occurred about the time of wild turkey egg hatching. Believe it or not, wet weather can influence turkey poult survival quite a bit. When you add to that disturbed nesting sites due to farming practices such as the mowing of hayfields, it’s amazing that turkey numbers are still flourishing in most areas. Predators and disease can be another issue concerning wild turkey population but life seems to find a way.

Why is weather so key to poult survival? The poults are fragile when first hatched and the colder, wetter weather oftentimes will lead to hypothermia. Not being able to regulate body heat makes them dependent on the hen for warmth.

What can hunters do to help the situation? In certain areas where fall hunting is open and hens are legal, hunters can help the population by choosing to not shoot hens. Hunters typically know the area they hunt in and know if the population is strong or not. Choosing to let hens walk in the fall could be the difference in keeping flock numbers from falling.

Many people thought that turkey numbers were down in Tennessee this spring, but statewide harvests were up 11 percent; however, when compared to the last five-year average the population is still in decline around 4 percent in certain areas.