<p>Photo courtesy of Randy Bullen</p> <p>Shown is a copy of a portion of the original minutes from the Claiborne Commission dated December 1802 in which the location of Fort Butler is discussed.</p> 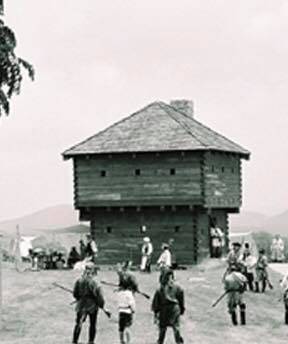 <p>Photo courtesy of Randy Bullen</p> <p>This photograph depicts how Fort Butler might have looked during its heyday.</p>

(This is the next installment in the series of articles from local history buff Randy Bullen. Bullen spent several months wading through numerous documents to arrive at a theory that names Fort Butler as the true county birthplace.)

In 1796, the Territory Southwest of the Ohio River, or Southwest Territory, became the State of Tennessee. Hawkins and Knox Counties bordered each other, meeting at the banks of the Clinch (or Pellissippi) River near the location of where Sycamore and Ball (or Bald) Creek terminated.

Grainger County was created from Knox and Hawkins in 1796 and soon Claiborne County was carved out of Hawkins and Grainger. But in 1798, the area known currently as Powell Valley was a part of the Cherokee Nation.

The area where the Big Sycamore and Ball Creek emptied into the Clinch, a blockhouse style strong-point was built, authorized by Governor John Sevier. This Fort served a multiple purposes: to protect settlers from Indian attacks; to interdict Indian war parties from using the Clinch River and tributaries; and to keep settlers from moving into Indian lands. It was likely named in honor of Col. Thomas Butler, commanding at Tellico Blockhouse and lead Indian Agent in the Southwest Territory.

Constructed around the same time as Yoakum Station, it was garrisoned by Federal Troops, around 10-12, rotated through from Southwest Point and the Tellico Blockhouse.

Fort Butler was a central part of the creation of Claiborne County. It was in use from 1796 until 1820s. UT did limited archaeological surveys on the Fort just prior to the creation of Norris Dam. Unfortunately, most of the logs and stones utilized for the Fort had been scavenged by settlers over the years.

This excerpt is from CHGS Reflections 18:

The farm on the road leading from Lone Mountain to Springdale and where it crosses Ball Creek was always been known as the “Garrison” Farm. It is now owned by W. H. Farmer. On the south bank of the creek, a short distance below where the road crosses it stood the old block house fort. The corner stones of the old building could be seen for many years afterwards. This was the site of Fort Butler. US troops were garrisoned there and the people spoke of it as the “garrison.” In one of the many treaties made with the Cherokee Indians, they ceded to the whites all north of a certain line. This was known as “Campbell’s Line” (missing) times called the “Dead Line.” It’s course through the country was S. 79 E. In a later treaty this line is called for as follows: “Thence up the river Clinch to Campbell’s line, then with the same to the top of Cumberland Mountain, (and near Cumberland Gap), thence a direct line to the Cumberland river where the Kentucky road crosses it.” (Now Pineville.) The whites were not allowed to cross to the south of this line and the Indians were not to come north of it. To preserve peace and protect each in the possession of their land this fort was erected and troops were ready to go at a moment’s warning. A great many people do not know the portholes were cut in these old log houses so as to permit those within to put their guns through and fire at the enemy. A log was sawed in two and the ends of the log sharpened like a glut, leaving room between the sharpened ends of the logs to puta rifle through. The shape of the glut-fashioned logs enabled the man inside, standing at the port-hole in the middle of the house to turn his gun and shoot an enemy at either corner on that side of the house.

The settlement at Fort Butler was once attacked by a large squad of Indians. The whites succeeded in getting them surrounded on a high bluff near the mouth of SYCAMORE (Day’s Bluff) and pressed them until they jumped over the cliff and were either killed or drowned. They killed nearly all the enemy. This was a great victory for Fort Butler. They were not molested any more for a long time.

Today, Fort Butler sits near Day’s Siding, underwater. So if you depart by boat from Lone Mountain Boat Dock, just before you pass where the Big Sycamore flows into the Clinch, slow down and look down as you will be crossing the first permanent settlement in Claiborne County.