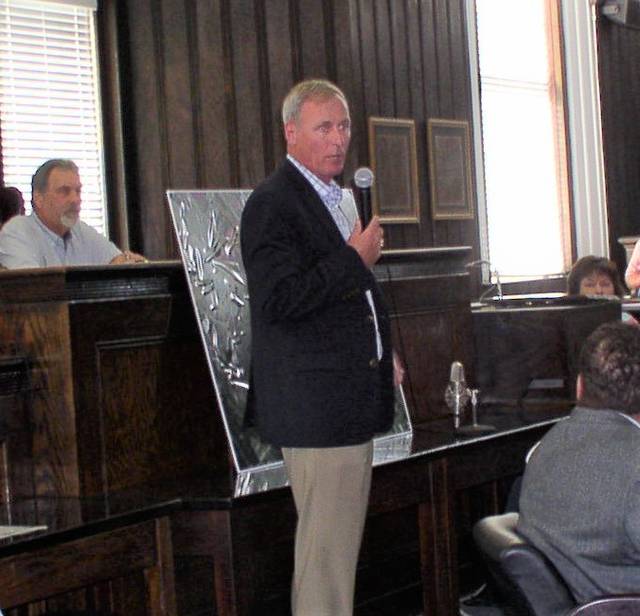 It appears the nearly defunct project to reconfigure the intersection at Cedar Fork Road and U.S 25E is now back on the table. County Mayor Joe Brooks and Tazewell Mayor Bill Fannon made the trip to Nashville to speak with Senator Frank Niceley and deputy commissioner Paul Degges.

Brooks said during the commission meeting last week that TDOT will be revisiting the intersection project. In particular, they will be looking at the northbound ramps and the deceleration lane moving south.

“In the late 1960s, the federal government put road project funds for each state in the Appalachian region into a pot. It’s calculated by the area and need. In the 1960s, there was a plan to separate these two roads (Cedar Fork and state route 32, which is commonly known as U.S. 25E and Hwy. 33). The federal government has stopped putting money into that pot in 2012.

“What the state is doing is trying to get as much of that money spent in areas where it’s needed. Now, the only way they can spend $3.3 million here of that free money is if those two road grades are separated. Because, that’s the way it was described in the late ‘60s, for the project. So, they can no longer go back and change the scope of the project,” said Brooks.

He said he and Fannon explained the flow-through traffic concerns coming from I-81 in Morristown to I-75 in Corbin.

“That’s when the deputy commissioner (Degges) said he would like to come back with a revitalized plan that would serve two needs – separate (the two roads) and tie this (the intersection) into the project.

“I asked for a best-case scenario of when he thought that would be. He gave me a timeframe of two to three months,” said Brooks.

He said he felt confident after the discussion, particularly about the concerns raised by Tazewell government. Initial concerns include the proposed closing of an access road to Main Street and possible hammerhead turnarounds on a one-way street. Another concern had to do with congestion problems anticipated by installing a control device for three outbound lanes of traffic while having none for one lane.

“Even senator Nicely said our message was well-received and he anticipates a favorable outcome,” said Brooks.

The new project design will not include any changes having to do with three problematic curves along Cedar Fork Road.

Brooks said he told the men in Nashville that SRK would prefer two outbound lanes and two inbound lanes be created so that truck traffic would have a wider turn ratio, preventing ongoing problems with guardrails being knocked down.

After more discussion, Brooks asked that the commission either pull or table the resolution up for vote. If adopted, the resolution would have effectively dropped the project, altogether. It was pulled from vote by its sponsor, commissioner Charlton Vass.