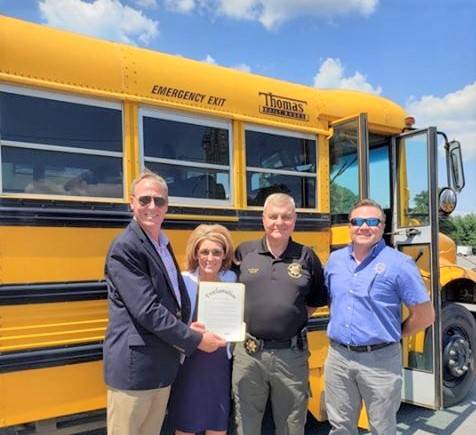 Claiborne County Jail inmates will now have an easier ride to and from their workdays courtesy of a decommissioned bus donated to the Fresh Start Program by the Claiborne School Board. From the left are County Mayor Joe Brooks, program creator Sherri Hoskins, Claiborne Sheriff Bob Brooks and Anthony Mountain, president of Homesteader, Inc.

Some 20 Claiborne County Jail inmates are benefiting from a pilot program allowing qualifying prisoners to participate in a work-release project. However, “Fresh Start” is not your average work-release program. Sherri Hoskins is the one responsible for starting the program.

She spent the last two years writing the initial program objectives and creating strict qualification guidelines. Those who qualify must have attained the rank of trustee. Those prisoners who were incarcerated on the more serious charges are banned from the program.

Hoskins then turned to Homesteader, Inc. whose owners were very receptive to having the pilot program tested in their factory.

In February, 12 inmate trustees began utilizing the program, working full time. Eight more were added to the workforce as they were qualified.

Their salaries go toward paying court costs, fines, probation fees and, for those who owe them, restitution and child support. The program also allows the building of an “untouchable” savings account that will assist in paying living expenses like rent and utilities, once released. Salaries go directly into the bank account instead of being handed to the inmates.

The program is also geared at helping the men improve their credit standings. Through their labor, any unpaid bills that show on their credit statements are paid off with their wages.

They are required to take courses in money management and what Hoskins describes as etiquette and basic life skills.

“I can be hard on them at times – I have to be. But, they are a group of guys who are working hard to change,” said Hoskins. “It’s been a blessing to me far beyond anything I could have dreamed.”

Instead of coming out of jail and going immediately back to their old ways, Hoskins says the inmates now have a chance to change the directions of their lives.

“They come out of jail debt-free with money in the savings account. This is the best way I can help them to get on their feet. These men are blessed with a second chance,” said Hoskins.

In less than half a year into the program, the inmates have managed to pay back over $21,000 in court costs and restitution through working at Homesteader. Some have earned merit awards for their outstanding work on the job.

“I feel like I’ve been blessed with 20 really good guys that I get to see grow and have a life. I want them to have a better life than the person who killed my child,” said Hoskins.

“If it can help them get their lives together with a fresh start by getting a job, rebuilding their credit – I think it’s great all the way around,” said Brooks.

The mayor signed a Proclamation on July 25, giving the pilot program kudos for its potential to improve the lives of the inmates, their families and friends and the community at large.

“This program is giving the inmates a chance to become productive members of society. We anticipate it cutting down the number of those reentering the jail.

“Nearly every day, the men who are in this program tell me how appreciative they are to be given the chance to participate,” said Brooks.

Plans are in the works to offer the same program to qualifying female inmates. Hoskins is also looking ahead at the creation of a program to assist those on parole.

Getting the inmates to and from the workplace five days a week just got a bit easier. The Claiborne School Board just donated a decommissioned bus to the Claiborne County Jail to use for transport purposes.

Previously, the inmates were being transported, six individuals at a time, via CCSO vans.

Tennessee governor Bill Lee is currently looking at this pilot project – reportedly the first of its kind in the state. If all goes as planned, Fresh Start could become a statewide program.

For more information about this program, call Hoskins at: 423-259-8189. The Fresh Start Program is an offshoot of Appalachian Promise.