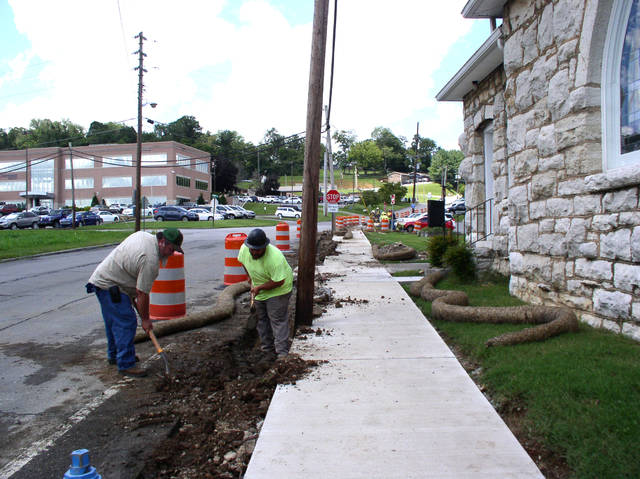 Whaley’s Construction employees are in the midst of working on phase II of the Tazewell sidewalk project, part of the Downtown Revitalization Program.

The City of Tazewell is in the midst of receiving its second round of facelift, courtesy of a $466,604 Downtown Revitalization Grant, first approved in late 2012.

Phase I of the project widened sidewalks from the Claiborne Election Commission office to the corner of Main Street and Kivett Drive. The stretch of handicapped-assessable sidewalks continued down the hill, ending near Hardee’s Restaurant.

The first phase also provided enough money to install a clock in the Rome Cardwell Memorial Park and some high-tech street lights along the revitalized portion of Main Street.

Phase II will extend the handicapped-assessable sidewalks to both ends of Main Street, where phase I initially stopped. The project picks up on one end of the street beside the Tazewell Methodist Church, running up the road to the parking lot across from the Claiborne Medical Center.

The project picks up on the north end of Main Street at the Claiborne Commission Office, running past Tazewell City Hall and a couple of businesses to the end of the street.

According to city recorder Robin Ruiz, there will be enough funds in Phase II to allow placement of benches, pedestrian lights and trash receptacles along the new section now being completed.

Repaving will also be done, just as it was with phase I of the project.

Phase II initially included the construction of a walking bridge that would allow pedestrians to cross from the Claiborne Medical Center to the parking lot. However, that portion of the project was scrapped.

The municipalities that benefit from the Downtown Revitalization Program must adhere to strict guidelines. Prior to the construction phase, many hours were devoted to environmental impact studies and other major steps that led to the eventual approval of Tazewell for the program.

The funds to pay for the 20 percent match to this 80/20 grant were evenly divided between the county and the city.