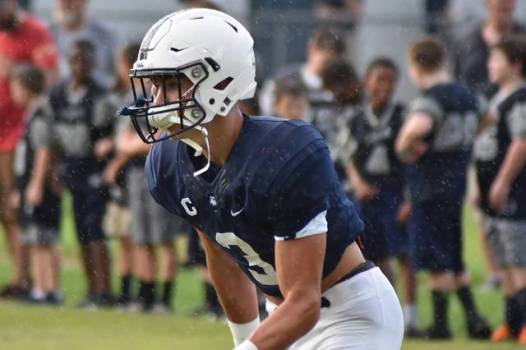 <p>Storm Livesay had a career night running the football tallying 175 yards and two touchdowns on 21 carries.</p> 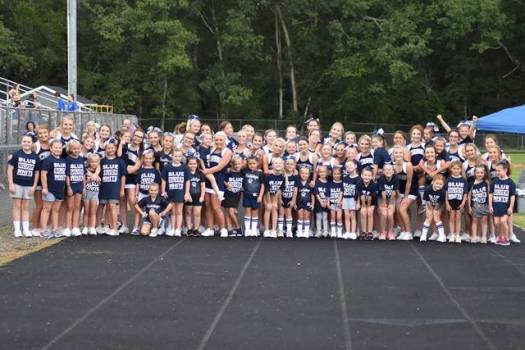 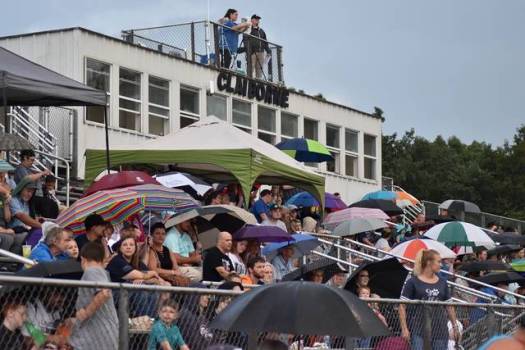 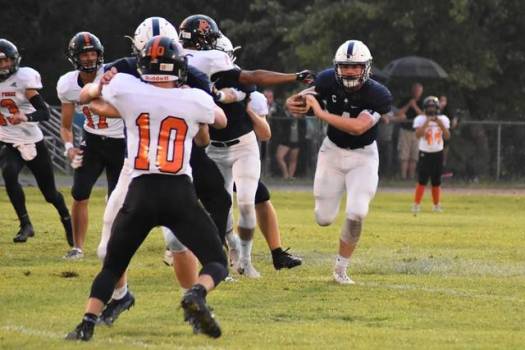 <p>Photos by Allen Earl | Claiborne Progress</p> <p>Eli Stone looks for running room during Friday’s win over Pigeon Forge. He played solid football behind center and even blocked a punt on special teams.</p>

The practices are over, the scrimmages are over, the jamborees are over and the 2019 Claiborne football season is now upon us. Pigeon Forge was the week one opponent for the Bulldogs as they ran out onto a soggy field Aug. 23 led by players from the Claiborne Youth Football Conference.

According to coach Nathan Medlin, the keys to a victory was simply this, “We’ve got to control the line of scrimmage on both sides. They are much bigger than we are. Their skill guys are fast, so we will do our best to contain them.”

The game was lightning delayed once, but when it got underway Claiborne was the immediate aggressor. Eli Stone blocked a punt and on offense, a few plays later, he found Hadyn Hollin for the touchdown. The conversion failed, but the Bulldogs led 6-0.

Claiborne’s defense gave the ball back to the offense, and a Stone pass to Ethan Poore found it’s mark for an apparent touchdown that was called back for holding. Pigeon Forge then had the momentum and scored on a pass from Mason Shults to C. Hughes. That conversion attempt failed and the score was tied at 6-6.

Storm Livesay found a hole and scored on a 74-yard rush, and Stone ran in the conversion to give the Bulldogs a 14-6 lead with 6:09 remaining in the second quarter.

The Tigers’ Shults broke a long run with around a minute remaining in the half to the Bulldogs 14. However, the Bulldogs defense tightened up and kept them out of the end zone. With 15 seconds left the Bulldogs ran out the clock taking the 14-6 lead into the dry locker room.

The third quarter belonged to both defenses, and there was no scoring at all until the fourth quarter.

Around the seven-minute mark, Daniel Eversole made a huge impact by leaping up in front of a Tigers’ pass and streaked down the sideline 13 yards for the pick-six. The conversion failed giving the Bulldogs a 20-6 lead.

Livesay scored his second touchdown on a 12-yard run. The conversion was good when a leaping Hollin made a beautiful play at the back corner pylon making the score 28-6.

Brady Maples responded and ran in for a Tigers TD with 1:09 left in the game, and the point after was good, 28-13. Pigeon Forge set up and recovered the onside kick, and a pass into the end zone found its mark. After the PAT the Tigers were still in it at 28-20. They again tried an onside kick but Claiborne was ready for it and recovered.

The Bulldogs had to run a couple plays to terminate the clock and actually gave the fans a huge scare by dropping the ball on the wet field, but they recovered, ran the victory play and secured the 28-20 win.

After the game, Medlin spoke to his team, “I’m proud of you, but you tried every way in the world to give it to them. Now we will invoke the 24-hour clock. Enjoy the win for 24 hours but be ready to work Monday because we have some things to work on.”

Livesay had 175 yards on 21 carries and two touchdowns.

The next game for CHS will be Friday at Union County.