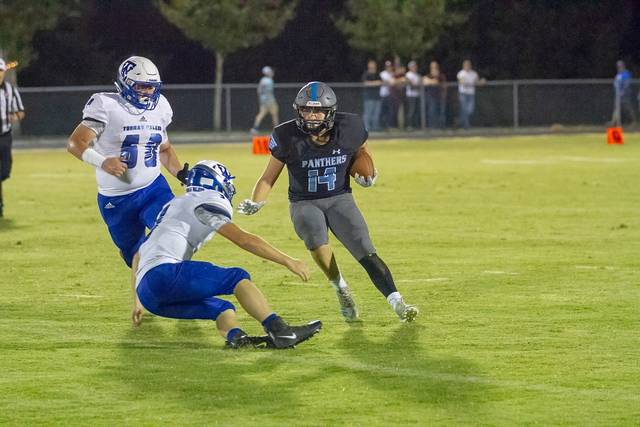 Logan Miracle takes on a double team during Cumberland Gap’s loss to Thomas Walker on Friday.

Cumberland Gap Panthers played host to Thomas Walker, Va. on Aug. 30. The Panthers were missing key players due to injury and suspensions, but the home fans were still ready to see their team win their home opener against the Pioneers.

Thomas Walker scored after intercepting a Panthers pass during the first quarter and forcing a punt to make the game a 7-0 contest. The Panthers defense wasn’t playing bad at all, but a miscue by the Panthers offense placed more pressure on the defense by not allowing time to rest. But, they found a way to bend and not break causing the Pioneers to turn it over on downs.

The ensuing Panther drive stalled out in Pioneers’ territory and a punt followed. The Panthers also grabbed a first quarter interception by Lance Owens.

Starting at their own 32, Thomas Walker’s Zack Kidwell connected with Logan Ely to Cumberland Gap’s one-yard line. They scored on a rushing play and kicked the PAT through the uprights to increase their lead to 14-0.

The Panthers offense had to punt once again and left the Pioneers enough time to score once more before the half making the Pioneer advantage 21-0.

After Cumberland Gap dropped the ball on the ground again, Thomas Walker was looking for more. They found it on a 16-yard rush from Dalton Langley. After a good PAT, the score was increased to 28-0.

Cumberland Gap finally found the end zone with two minutes left in the third. A pass covering 10 yards from Caden Brunsma to Edward McGraw gave the home team something to cheer for, but the PAT was missed. The Panthers had narrowed to gap to 28-6.

With around five minutes to go in the game, the Pioneers scored again on a 30-yard run by Kenny Ball. The PAT was good and the visitors enjoyed the 35-6 lead.

Cumberland Gap found the end zone one more time with a pass to Logan Daniels, but the PAT was no good. The score with one minute to go was 35-12, and the remainder of the time on the clock ticked away as the Pioneers rode back to Virginia with a victory over a rival.

Coach DeLynn Cline spoke of the situation his team was in, “Well, we had so many players out and those that had to play in their spots were inexperienced. Some had never played middle school football. It was really a great time to work on our depth.

“It’s not getting any easier for us next week as we will travel to Meigs to play what may be the number one team in our classification. They have a great ‘Mr. Football’ quarterback that has put on a few pounds from last season and can run like a deer. We need to focus on the fact that we went up there last year and done some really good things.”