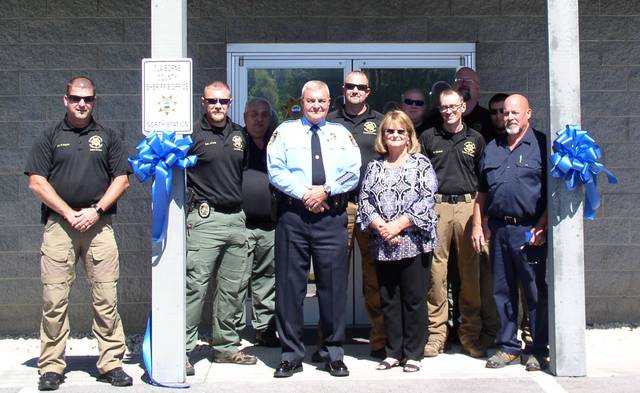 Claiborne Sheriff Bob Brooks stands before the doors of the new CCSO Harrogate Substation with Harrogate Mayor Linda Fultz and a handful of officers. The substation was officially dedicated on Sept. 6 with a ribbon cutting ceremony.

The city of Harrogate has become just that much more secure, with the opening of the Claiborne County Sheriff’s Office substation, located on the first floor of the Old Depot building on Bristol Road.

“It’s been a long time coming. This north side of the county has needed this for a long time. It will cut down on response time. It’ll increase patrols in the neighborhoods, because there’s so many ways in and out of here,” said Claiborne Sheriff Bob Brooks.

The substation, which has been up and running since Aug. 30, was officially celebrated on Sept. 6 with a ribbon cutting ceremony.

“Everything they can do at the Justice Center, they can do right here – all the reports. It’ll cut down the need to go over there. It also cuts out 12 to 13 miles response time from the south side,” said Brooks.

There are normally two officers and one sergeant working per shift that will now have access to the substation when in the northern portion of the county.

“But, also the detectives can utilize it. Instead of people having to go to Tazewell to meet with somebody to take a report, they can leave it here,” said Brooks.

He expressed his deep appreciation to the city, the mayor and to Book Station director Barbara Ramsey, for their willingness to establish a substation.

Brooks said the space was previously used for storage. It took a substantial amount of elbow grease and time to move the stored books and other items from the lower level of the building, he said.

Mayor Linda Fultz said she is excited to help the sheriff’s department find a home inside the city.

“It’s going to be a big asset to Harrogate. We just can’t afford our own police department, since we have no city tax. This is a blessing, for us,” said Fultz.