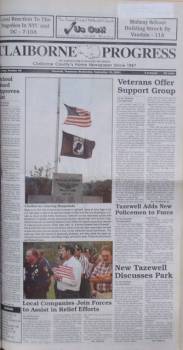 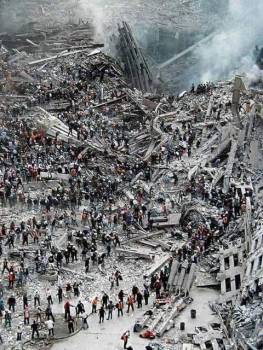 <p>Courtesy photo</p> <p>The devastation is clearly depicted in this photograph of Ground Zero following the terrorist attacks on the World Trade Center in New York City.</p>

Today marks the 18th anniversary of the terrorist attacks on U.S. soil by 19 militants associated with the Islamic extremist group al-Qaida. By the end of that long day, a total 2,996 human beings had died – individuals representing 78 countries worldwide had been slain in New York, Washington D.C. and Pennsylvania.

Sept. 11, 2001 dawned in New York City as the sun revealed brilliant robin’s egg blue skies and cottony clouds. Many would later comment on just how perfect the weather had been just before 8:45 a.m. and how quickly the ash replaced the beauty as the first of two planes crashed into the north tower of the World Trade Center.

As eye-witnesses looked on in horror, a gaping burning hole near the 80th floor of the skyscraper bore witness to what would later be confirmed as the instantaneous murder of hundreds of individuals. Hundreds more were trapped inside the tower, trying frantically to escape the flames and noxious air.

Many chose to jump to certain death rather than suffocate or burn.

Some 18 minutes after the first impact, a second plane appeared in the sky, turned sharply toward the World Trade Center and sliced through the south tower near the 60th floor. The second hit created a massive explosion as burning debris fell to the ground.

Meanwhile, a third plane had been taken over by terrorists and was heading toward its destination – the Pentagon. At 9:45 a.m. Flight 77 crashed into the west side of the military headquarters. That hit resulted in a devastating inferno that caused structural collapse of part of the concrete building.

It was later learned that 125 personnel and civilians at the Pentagon, and an additional 64 people inside the airliner, had died as a result of this third strike.

A fourth plane had been taken over by terrorists. Flight 93 was hijacked some 40 minutes after leaving the airport in New Jersey, its flight plan laid out for California.

A delay in takeoff allowed the passengers the chance to learn of the other hijacked planes while talking with loved ones via cell and Airfone.

Knowing the probable outcome of their flight, passengers and attendants agreed to go down fighting – to attempt a takeover rather than let another hijacked plane arrive at its destination.

“I know we’re all going to die. There’re three of us who are going to do something about it,” passenger Thomas Burnett Jr. reportedly told his wife via a phone call.

The plan was hatched. The call to arms was lifted by fellow passenger Todd Beamer, who could be heard over an open phone line saying “Are you guys ready? Let’s roll.”

The group made the cockpit, battling the four hijackers with pitchers of boiling water and a fire extinguisher. As the fight ensued, the plane lost control and flipped over, speeding toward the ground at nearly 500 miles per hour.

At 10:10 a.m., Flight 93 crashed into a rural field near Shanksville in western Pennsylvania.

All 44 people onboard were killed. Although not certain, it is theorized that the hijackers’ intended target had been either the White House, the U.S. Capitol, the Camp David Presidential Retreat in Maryland or one of several nuclear power plants along the eastern seaboard.

Back at the World Trade Center, the count of dead rose to 2,763 souls including 343 firefighters and paramedics, 23 New York City police officers and 37 Port Authority officers. These individuals died while struggling throughout the day to evacuate those still trapped on the higher floors.

Viewers were glued to their televisions at 9 p.m. that evening, as then President George W. Bush addressed the nation.

Operation Enduring Freedom, begun on Oct. 7, was aimed at ousting the Taliban regime in Afghanistan and destroying Osama Bin Laden’s terrorist network. Within two months, U.S. forces had effectively removed the Taliban from operational power. The war continued, however, as U.S. and coalition forces attempted to defeat a Taliban insurgency campaign based in neighboring Pakistan.

Bin Laden was eventually tracked down and killed on May 2, 2011.

The Department of Homeland Security was created, in part, as a result of the terrorist attacks.

The 9/11 Commission released its report in 2004, finding that Khalid Sheikh Mohammed was the principal architect behind the operation.

Locally, the volunteer spirit kicked into high gear as local businesses and schools began sending water, food, supplies and funds to those impacted by the attack. Churches remained unlocked for those wanting to find solace inside a house of worship. Patriotism was at an all-time high inside the county, as American Flags were lowered to half-staff, then raised high in seeming defiance of those who would bring their destructive mission upon U.S. soil.

Most everyone seemed to pull together during those first hours and days after the attacks. Home and hearth was principle as county residents joined those across the nation in coming to grips with the reality.

Alan Bailey, then-owner of Old Town Detail Shop, wanted to express his patriotism in a tangible way. He bought $60 worth of miniature flags, handing them out to customers and fellow business owners.

“You know, it seems like such a small thing to do – to buy a few flags and pass them out,” said Bailey, in an interview for an article in the Sept. 19, 2001 edition of the Claiborne Progress.

When he first learned of the attack on the World Trade Center, Bailey said he thought it was “just an accident.”

“Then, I heard that a second plane had hit the other tower and I was stunned. When we were hit at Pearl Harbor during World War II, it was a military base. This was civilians being hit and killed on American soil,” said Bailey, during the interview.

Economically, America sustained some heavy impacts. The market fell 7.1 percent, or 684 points, on the first day of trading following the attacks. There was a loss of 143,000 jobs per month and some $2.8 billion in wages during the first three months after the incidents.

It is estimated that $60 billion in damages was sustained at the World Trade Center. It cost $750 million to clean up Ground Zero.

Thousands of first responders and those working and living in lower Manhattan were exposed to toxic fumes and particles. Some 10,000 individuals have been diagnosed with 9/11 related cancer. The numbers continue to rise.

Each year, Sept. 11 is commemorated with a special light show. Two columns of light are shot into the sky from where the Twin Towers once stood. The names of all 2,983 victims are engraved on 152 bronze panels surrounding the pools at the Ground Zero Memorial.

The National September 11 Memorial & Museum was opened on the original World Trade Center Site in May 2014.