Vampire plants: Outside the norm 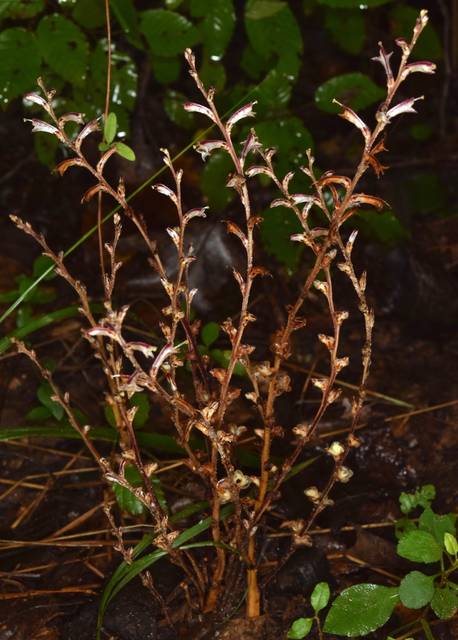 The standard definition of a plant is a life form that is green and capable of making its own food through photosynthesis, and for the majority of plant families that is true, and are designated as autotrophs, meaning “self-feeding.” But there are plants that defy the status quo and lack the green chlorophyll needed for food production, and must get their nourishment through other means, some by taking it from other plants by sucking their version lifeblood, sap.

These plants are called heterotrophs (“other feeders”), and there are several growing in our forests and in flower late summer, making them easier to see on the forest floor. One is called Beechdrops that form small colonies of slender, purplish brown stalks (around a foot tall) under beech trees. You have to look close to see the flowers, which are the same color as the stalk, and while not showy have a beauty all their own. They are tubular and have two lip-like projections. Beechdrops have modified roots that can penetrate beech tree roots and absorb nutrition, but don’t do any discernable harm to the tree, so the theft is a minimal one.

Another local heterotroph is Indian pipe, a pale white plant that stands about 5-8 inches tall and has a strong downward bend at the top where the flower is. The stalk has a scaly look to it, and the white color makes one think it’s a fungus, but not so. Lacking chlorophyll, Indian pipe also feeds off tree roots but in a secondary way. Most tree roots are colonized by mycorrhiza, a fungus that forms a network of underground threads that enter the roots in order to tap into the tree’s nutrients. But the tree benefits from this arrangement because the fungal threads increase the tree root’s ability to absorb water and minerals from the soil, a win-win situation called a symbiotic relationship. But the Indian pipe penetrate the mycorrhizal threads and absorb nutrients originally produced by the tree roots while returning nothing to the mycorrhiza.

A third heterotroph that can be found walking the woods is squaw root, a low growing, brown, scaly plant that looks like a pinecone sticking out of the ground. This is the flower stalk and has non-showy round blooms in early summer. These are heavily consumed by black bear in the early spring when they first come out of hibernation and very hungry. Squaw root parasitizes the roots of oaks.

Besides being strange and interesting plants, they all have a history of medicinal use. Beechdrops are also called cancer root and was used to treat cancerous ulcers. Indian pipe was used for inflamed eyes, bunions, and warts. Squawroot was used to treat the symptoms of menopause and to treat hemorrhages and headaches. If you’re in the woods this fall, look around to see if you see these outside the norm plants.

Steve Roark is a retired area forester from Tazewell, Tennessee.