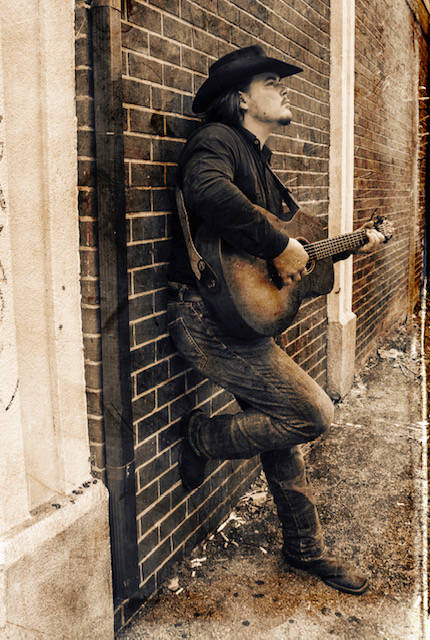 Native Claiborne countian Andrew Hopson pursues his musical career with the release of his first single “Paint the Town Redneck” as it receives airtime from regional radio stations. Hopson is currently collaborating with songwriter Steve O’Brien for a late spring release of his first album and second single.

Claiborne native Andrew Hopson has begun his personal magic carpet ride as he pursues his dream of making music for the masses. From all reports, the young man has his head firmly screwed on and his feet solidly planted – two necessities when chasing your passion.

Hopson is well on his way, with the release of his single “Paint the Town Redneck,” a cover of a hit song by country artist John Michael Montgomery, co-penned by Steve O’Brien.

Hopson says he was a big fan of the song for years and that, growing up, Montgomery had been one of his music idols.

After meeting and becoming friends with O’Brien, the two decided to collaborate on the cover, which was released by CDX Digital Service to all traditional country stations around the world.

Hopson recently returned from another trip to Nashville where he performed on the CDX Listening Party – a venue that features latest works by both stars in the industry and newcomers who fit the Indie singer/songwriter genre. While there, he was given the opportunity to showcase the Hopson/O’Brien original “Stronger than That,” which will be included in his first album, due out next spring.

Hopson says he loves it when a solid country song can be given a unique rock twist – like adding chords and special melodies that would be unexpected in the more traditional country vein.

Still, he says he remains true to himself and to classic country artists like Hank Williams Sr., Vern Gosdin, Merle Haggard and Keith Whitley – a few of his biggest idols.

Hopson first came into contact with the works of these and other traditional country singers/songwriters as a child, growing up with a mother who was a big fan of country and southern rock. Through daily doses of Willie Nelson, Charlie Rich, Reba McIntyre, Johnny Cash and other stars, Hopson began to form his own unique version of country music.

His brother, Matt, “unintentionally” turned the young seven-year-old onto the guitar. One day, the youngster picked up his brother’s instrument and decided it was a better fit for him than the piano lessons he had begun the year before.

A few electric guitar lessons later, Hopson settled on the acoustic. The first song he learned to sing and play was the Jamey Johnson hit “In Color.”

Hopson says he might not have ever pursued his passion if not for the encouragement of his family and friends. While in college, he found it hard to settle on a major. One day, his mother sat him down and reminded him of his lifetime love of music. Hopson said his mother told him to “go for it.”

Even though he enjoys taking a few risks in his musical style, Hopson says his repertoire remains “true to the bone” – a little part of his hometown packaged in every song.

It was at one of his jaunts to Nashville that Hopson first met music consultant and freelance journalist Preshias Tomes Harris, who is handling his career.

According to Harris, the singer/songwriter will be releasing his second single, “New to Neon” in the spring with a full-album release in late spring 2020. The release will coincide with a radio station tour.

Some of the best studio musicians will be performing on the album, as they lay tracks in Nashville over the coming months.

Meanwhile, Hopson’s first single is beginning to take hold at radio stations at both the local and regional levels. WNTT has been getting good responses from listeners as radio stations in Morristown and Knoxville are beginning to spin the song. “Paint the Town Redneck” is garnering airplay via other outlets in Kentucky as well.

Hopson grew up in the Springdale community of Claiborne County. He graduated from Claiborne High School prior to entering Walter State Community College.

Hopson is shooting for a Thanksgiving start date for his official YouTube channel. In the meantime, you may catch some of his work on YouTube via posts from the CDX Nashville Listening Party, recorded early last month.