Panthers win second in a row with victory over Lee 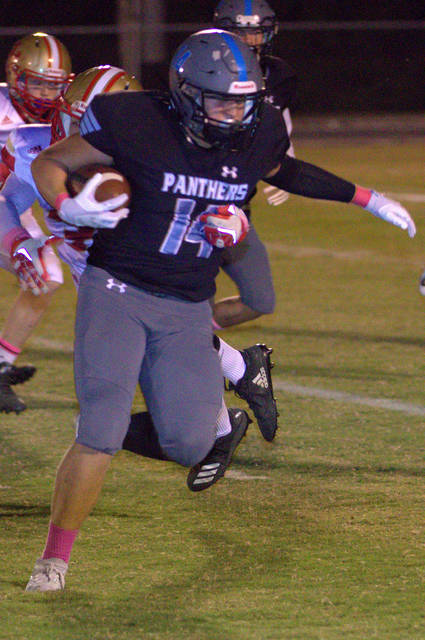 Logan Miracle sheds a defender during one of his rushing attempts on Friday.

Lee High, Va. came to Cumberland Gap Oct. 11 for a football battle with the Panthers, who were fresh off their first win of the season. Cumberland Gap got a taste of victory and wanted more.

The Generals won the toss and wanted the ball to start the game. They put the first points on the board at the 8:50 mark of the opening quarter. The point after failed and the lead was 6-0.

The Panthers responded at 3:58 on a 15-yard Holdin McDaniel run down the sideline. Drew Ramsey was back in action off injury and kicked the extra point through the uprights. The Panthers led for the first time 7-6.

Coming into the second quarter, the Panthers dialed up Logan Miracle and he responded with an 8-yard run up the middle. The PAT was true and the Panthers led 14-6 at the half. Miracle had already rushed for 100 yards with more to come.

Cumberland Gap received the ball to begin the second half and put together a long drive. With 8:47 showing on the third quarter clock, Caden Brunsma scored on a 2-yard run up the middle. Ramsey’s PAT was good and the Panthers increased their advantage to 21-6.

The Panthers defense played well and gave the ball back to the offense who scored again at the 4:32 mark when Miracle ran it in from one yard. The PAT was good and the score was 28-6.

During the final quarter, Brunsma scored yet again from one yard out to give the Panthers a 42-14 lead after the Ramsey extra point. That was the final score of the game, and the Panthers were officially on a winning streak.

After the game, Miracle was asked about how he felt.

“This feels great! We started off the season so slow with all the injuries and such and to bounce back like this is awesome. Our line has stepped up a lot, and they know what they have to do to make us successful. We have had some great practices and I could not have had a game like tonight without them.”

Panthers head coach DeLynn Cline said this about the win, “I can’t say enough about this bunch. So many injuries early in the year and to bounce back shows the mental toughness of these kids. They have been practicing hard, and it makes such a difference getting our skill players back. The big guys up front played so good these last two games. I can’t say enough about these guys. Great team effort, we told the guys that Lee was huge up front and our guys answered the bell. What I was really proud of was that we got down by six early and it did not phase them. That is so much for these guys believing and knowing they can do it.”

The Panthers will battle Hancock County Oct. 18 looking for their third win in a row.