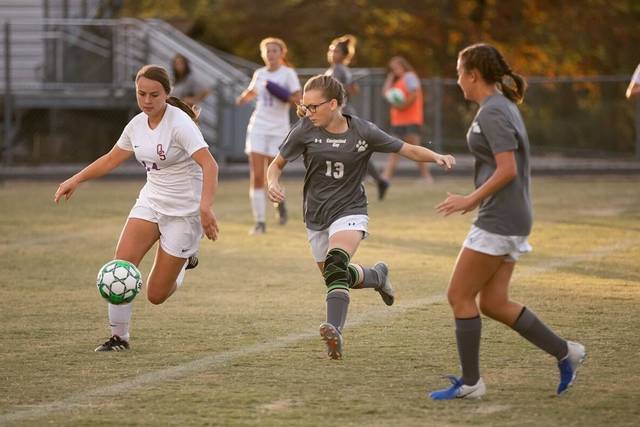 The Cumberland Gap Lady Panthers began their March for a potential district title Oct. 15. After a great regular season, the Lady Panthers wanted more. They met Oliver Springs on the pitch at Cumberland Gap High School and simply took control early and ran off to a 6-1 win.

Aly Ramsey was on fire as she kicked in two goals and assisted on three others. Chantel Davis helped her team advance with two goals while Gabby Gracia had one goal and a single assist.

Brianna Goins also recorded a goal. Others having one assist were Riley Collett and Amelia Serrenho. Allison McCorkel played well between the posts and had one save.

With the win, Cumberland Gap had a tough task ahead of them in a trip to Oneida for the district title. They battled the Lady Indians on Oct. 17, but it wasn’t the game they imagined.

Aly Ramsey scored the only goal for the Gap on an assist from Riley Collett. The Lady Panthers only allowed two goals. Allison McCorkle had five saves. The score of 2-1 at halftime held out for the entirety of the game. The Lady Panthers controlled the ball most of the second half but couldn’t connect on a game-tying goal.

Lady Panthers head coach Lorri Peters said this about her team and their efforts, “I’m super proud of our team. District runner-up is a great achievement, but we are working for more. (We are) looking forward to starting regional tournament play next week at Greenback.”

The Lady Panthers will make the trip to Greenback on Oct. 22.