Panthers travel to Hancock for the win 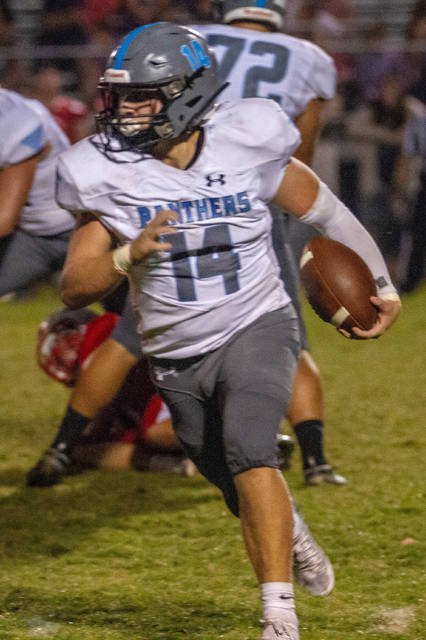 Logan Miracle ran the ball well for the Panthers against Hancock.

Cumberland Gap High School traveled to Hancock County Oct. 18 to battle the Indians, who were playing on their own turf. The Panthers came in looking for their third win of the season and third in a row. They are now healthy and are a dangerous team.

They jumped ahead early and led the game after one half of play 28-6. The running game was strong with Logan Miracle, Lance Owens and quarterback Caden Brunsma.

The Panthers also added two through the air with Logan Daniels that made the final score 35-18.

Panthers head coach DeLynn Cline spoke of how the Panthers got the job done, “The running game was the story tonight. Logan Miracle and Lance Owens ran well along with Caden Brunsma. The offensive line did a great job and Logan Daniels got two touchdowns through the air for us.”

Cline continued, “We played well. We relaxed a little after we got up, but other than that, played really well.”

As well as the Panthers are playing, they would have to be considered the favorite in the upcoming rivalry game against Claiborne on Friday.