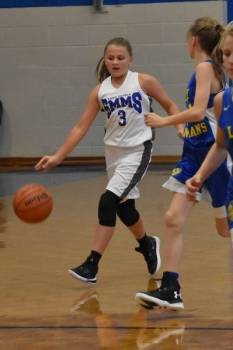 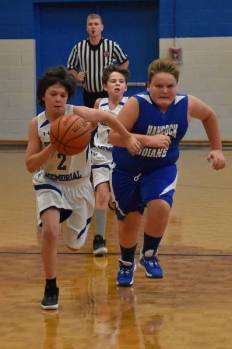 Soldiers Memorial Middle School opened the 2019-2020 basketball season up against the Indians from Hancock County Oct. 22. There were four games on the schedule with the two junior varsity games starting off the action.

The JV ladies were up first, and it was all Lady Indians the opening period, 6-0. The Lady Blue Devils got behind even more on the score board trailing at the half, 13-0.

During the third, Hancock added two points to lead 15-0 and SMMS was still searching for their first basket. The Lady Blue placed four points on the board during the final period but fell 15-4. Leading SMMS in the losing effort was Jossilyn Roberts and Jaylen Pressnell with two points each. The Lady Indians were led by Gracee ones with six.

Up next were the JV boys. SMMS got on the board first and prevented Hancock from scoring. It was 4-0 going into the second period. Hancock was able to get six on the board; however, the Blue Devils led 10-6 at the half.

The Indians stormed back during the third and were only down by five going into the final period. They almost came back but the Blue Devils won 18-15. Leading the Blue Devils in scoring was Jaden Meyers with five, Hunter Greer had four, Aiden Mink had four, Kaden Lovin and Aiden Roark had two each and Joe Lewis one point. Jerry led Hancock with six.