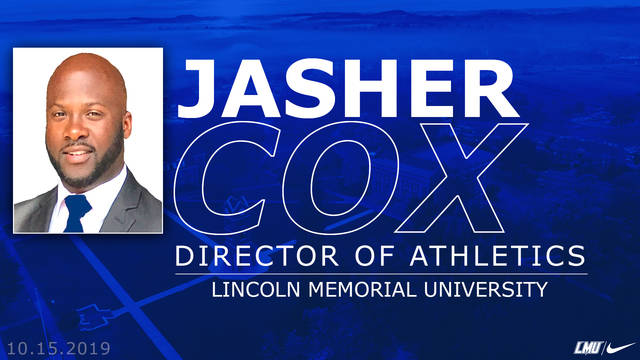 Currently an assistant athletic director at Tuskegee University in Tuskegee, Ala., Cox brings over 18 years of intercollegiate athletics experience to the LMU athletic department. He will begin his duties of leading LMU athletics on Nov. 12.

Cox is in his third season as a member of the senior athletics administration at Tuskegee where he reports to the director of athletics. Working in conjunction with the entire athletic department, Cox provides strategic leadership and vision while also overseeing athletic communications.

“I am truly humbled to become the next director of athletics at Lincoln Memorial University.” Cox said. “My sincere gratitude to the Board of Trustees, President Dr. Hess, Dr. Goins, Dr. Pete DeBusk and the members of the search committee for choosing me to lead the athletics department during this transformative period at LMU. The infectious energy exhibited to me during the interview process makes this a tremendous opportunity and I am ready.”

Prior to his time at Tuskegee, Cox was the assistant commissioner of communications and broadcasting at the Horizon League in Indianapolis, Ind.

“I am looking forward to collaborating with LMU’s passionate faculty, staff, administrators and coaches in delivering an exceptional experience for our talented student-athletes academically, athletically and socially,” commented Cox. “As a unit, we will work relentlessly to make a positive impact in the community and establish a culture where teams compete for and win championships in all sports.”

During Cox’s first two years at Tuskegee, he assisted the director of athletics in meeting department’s fundraising needs by landing multiple corporate partnerships. In 2018, Cox helped the university land its very first regional television broadcast, which aired on the CW-Network in Montgomery, Ala. He also helped lead the women’s basketball head coach search committee that eventually led to the hiring of Trelanne Powell, who won the Southern Intercollegiate Athletic Conference’s (SIAC) Western Division in her first season after posting a 20-6 overall record and a 13-3 league mark.

Prior to his time at Tuskegee, Cox led the communications staff at NCAA Division I conference the Horizon League where he oversaw the league’s creation and deployment of all ESPN streaming content. He served as the primary liaison to all broadcasting partners, insuring contract fulfillment, broadcast oversight and quality control management.

Before joining the Horizon League, Cox served as the assistant commissioner for communications at the Southwestern Athletic Conference (SWAC) in Birmingham. Throughout his over four- year tenure at the SWAC’s headquarters, Cox managed all aspects of the SWAC Digital Network along with serving as the primary contact for men’s basketball, football and golf. He also maintained the official SWAC website, SWAC.org, and developed sponsorship packages.

Cox assisted in restructuring the league’s football media day as well, which now has a live video stream and radio row.

Prior to his role at the SWAC, Cox was an assistant director at Division I and SWAC member Alabama State University where he worked in the sports information office and served in many roles from 2009-12.

Earlier in his career, Cox was a producer for CBS 8 WAKA in Montgomery, Ala. He covered Southeastern Conference news and was the producer of the evening newscast. During his time with CBS 8 WAKA, Cox covered the annual SEC Football Media Days as well as the 2005 Sugar Bowl and 2008 FBS National Championship game.

Cox’s first career opportunity came in 1999 as a columnist for Inside the Auburn Tigers magazine. He would later co-host a regional sports call-in radio show centered in Auburn, Ala., known as Sports Call.

As an undergraduate at his alma mater Auburn University, Cox was the official voice for the Tigers’ softball and volleyball teams. Today, Cox still has SEC ties as he moderates all post-game press conferences at the league’s annual baseball tournament in Hoover, Ala.

Cox received his Bachelor of Arts degree in communication and media studies from Auburn in 2003 and earned his Master of Public Administration (MPA) from Strayer University in 2014.

A native of Notasulga, Ala., Jasher is married to Ebony Cox. Together they have two children, a daughter Cayden and a son, Cyre.