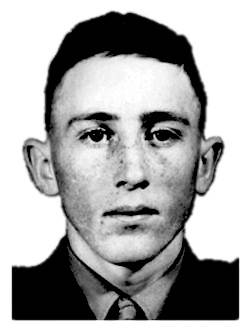 WWII Marine Pvt. Channing R. Whitaker left for service at the age of 17. He is returning home after having been ‘missing in action’ for 76 years - his body recently recovered in a ‘battle burial’ gravesite oversees.

Advances in DNA technology are allowing one World War II Marine to be laid to his final rest in American soil. Having gone missing in action for some 76 years, Marine Corps Reserve Pvt. Channing R. Whitaker will be buried on Nov. 22 with full military honors near his hometown of Granger, Iowa.

Whitaker is the direct descendent of the Rev. Rice and Nancy Whiteacre (circa 1788), who are counted among those pioneers who first settled the territory that would become Claiborne county.

At the age of 17, Whitaker convinced his mother to sign the paper that would allow the patriotic youngster to join the service. He would be the only one of eight Whitaker sons who served in WWII that would not return home alive.

Whitaker enlisted on Dec. 14 of 1942. By July of 1943, he was one of a group of young men stationed on the S.S. Sommelsdick, heading out of San Diego to the uncertainty of war overseas.

His unit was deployed on Nov. 20 as an offshore reserve during D-Day operations at Tarawa Atoll, a remote island among the Gilbert group of islands. The Marines landed on Green Beach, on the small island of Betio, the next day in an effort to take the location. The landing was initially met with heavy resistance.

Over several days of intense fighting at Tarawa, approximately 1,000 Marines and Sailors were killed and more than 2,000 were wounded. The Japanese were virtually annihilated.

Whitaker died on the third day of the battle, during a large banzai attack. He was initially reported to have been buried in the East Division Cemetery, eventually renamed Cemetery #33.

Following the war, the federal government initiated the “leave no man behind” project, prompting the return to U.S. soil of the bodies of those who had had a “battle burial.”

Shortly after the end of the war, the 604th Quartermaster Graves Registration Company began to centralize all American remains found on Tarawa, transferring them to Lone Palm Cemetery for later repatriation. Sadly, nearly half the known casualties were never found.

Whitaker was counted among those missing. In October of 1949, a Board of Review declared the young man “non-recoverable.”

Some 60 years later, History Flight – a nonprofit organization – notified the DPAA that they had discovered a burial site on Betio Island, while actively recovering the remains of missing American service members.

Another 10 years of excavating brought to light a previously undiscovered burial trench. Remains from that site were sent to the DPAA laboratory for identification.

Using dental, anthropological and chest radiograph comparison analysis, as well as circumstantial and material evidence, the lab scientists were able to identify those remains.

Finally, in May of this year, it was announced by the Defense POW/MIA Accounting Agency that Whitaker had been located among those discovered in the burial trench.

Whitaker is among those whose names are recorded on the Courts of the Missing at the Punchbowl. A rosette will be placed next to his name to indicate that he was found and is now in his final resting place.

At the time of his death, Whitaker was a member of Company A, 1st Battalion, 6th Marine Regiment, 2nd Marine Division, Fleet Marine Force. He was one of eight sons and two daughters of the late Luther and Retta Whitaker.

Of the 16 million Americans who served during WWII, more than 400,000 lost their lives. Currently, there are 72,648 service members unaccounted for, with approximately 30,000 assessed as possibly recoverable.

Families of service members may gather more information about their loved ones by calling the Marine Corps Service Casualty office at 800-847-1597.

For more information about the Defense Department mission to account for missing service members, visit the DPAA website at: www.dpaa.mil or call 703-699-1420, ext. 1169.

To discover more about The Claiborne County Pioneer Project, or to submit a specific surname, email Denny and Marla Brubaker at: DennyBrub@aol.com.

The Project is a private endeavor whose purpose is to record the genealogies of those who pioneered this area. Over 108,000 individuals have been documented as having ancestral ties to Claiborne county pioneers.

The Project can also supply family history reports as simple word document attachments. The service is free for the asking on a share to share basis. All sources are cited for further follow-up and proofing by the researcher.