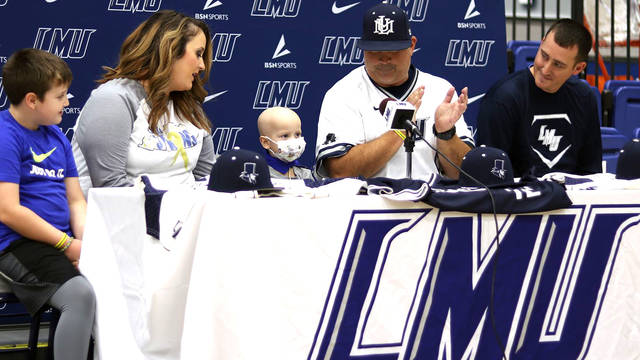 A two-year-old Pineville native, Caisyn was diagnosed with neuroblastoma, a rare form of stomach cancer, in September and found out he also has bone cancer after doctor’s revealed that a mass in his stomach had spread to his spine.

“Dear, Caisyn, by signing this document you are committing to upholding the following standards and guidelines of the LMU baseball program,” spoke coach Sziksai. “The core covenants of the program are: No. 1, put the team first; No. 2, always give your best effort; No. 3, do the right thing in all circumstances; No. 4, get better, no excuses. ‘I, Caisyn Fuson, understand the obligations of this document and will adhere to it. The purpose of this document is to certify my decision to become an honorary member of the Lincoln Memorial University baseball program and support the team.’”

Following coach Sziksai’s comments, Caisyn put ink to paper and signed to be a Railsplitter.

To learn more about Caisyn’s journey and his battle with pediatric cancer, follow the #CaismanStrong Facebook page – @caismanstrong “Caisyn’s Journey: Cais-Man Strong”. If you feel led to become a part of Caisyn’s fight, you can make a donation via PayPal.