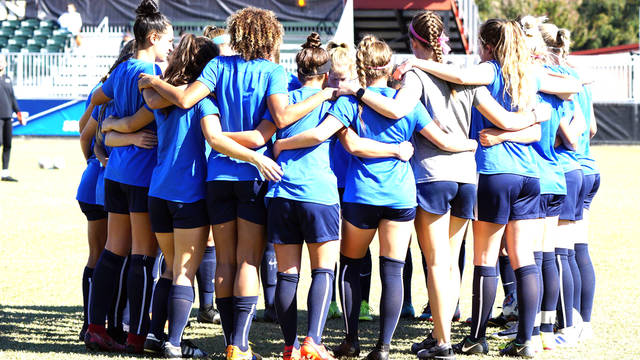 The fourth-seeded Lincoln Memorial University women’s soccer team proved it had what it took to hang with No. 1-seeded, No. 3-ranked Flagler College on its own pitch Sunday afternoon in the NCAA Southeast Regional semifinals.

SAINT AUGUSTINE, Fla. — It could have gone either way.

The fourth-seeded Lincoln Memorial University women’s soccer team proved it had what it took to hang with No. 1-seeded, No. 3-ranked Flagler College on its own pitch Sunday afternoon in the NCAA Southeast Regional semifinals.

LMU (17-5) scored first but unfortunately the undefeated Saints (21-0-1) netted a pair of second-half goals to slip away with the 2-1 victory in heartbreaking fashion to end the Lady Railsplitters’ most-winningest season since 1997.

“Tough game to lose, especially the way that we lost with a minute and a half left,” LMU head coach Sean Fraser said. “I think we are unlucky to lose. I think if we would have won it, they would have been unlucky to lose as well. It was such a good advert of Division II women’s soccer.

“I’m disappointed for our seniors because they’ve been amazing for the last two years that they’ve been here for the most part. We competed really well; again, I just think we are unfortunate there, but good luck to Flagler in the next round. They are a good team and they’ve got a good chance.”

The second-round matchup was the first between the pair of teams and it wasn’t one to disappoint. LMU tallied 10 shots with five on goal while Flagler had 19 and 12 on target.

Of those shots, the Lady Railsplitters had four in the first half and none bigger than Jessica Cravero’s header (her 18th goal of the year) just before half in the 35th minute that Rachel Taylor placed perfectly — for the second consecutive game for her seventh assist — to put LMU ahead first.

The Lady Railsplitter lead held true for some time before Josefine Nilsen took a cross from M. Castorino Mujica and scored the equalizer in the 58-minute mark.

LMU goalkeeper Emanuely Costa and the backline of Ermelinda Pantaleao, Sydney Wolfenbarger and Fabienne Loetscher put it all on the line as each of them cleared everything that entered. Notably, just before Concepcion Sanchez connected on a corner kick from Mujica, Costa made an unbelievable upward, diving save — one of her 12 — to keep it knotted up.

However, the tiebreaker from Sanchez with less than two minutes remaining trumped it all, leaving the Lady Railsplitters with no more chances, though Itzel Ballesteros whipped a shot just above the crossbar following the lead-taking score.

“Manu has done well. Manu’s part was in games like today. We said to her many times ‘In big games, your goalkeeper has to make big saves,’” Fraser said. “Their goalkeeper ultimately made one or two big saves, as well, to help them win. I’m just proud because we have match winners all over the pitch, and they’ve all been shining all season and that’s why we are where we are. I’m proud of Manu and also proud of the rest of them.

“We talked to the team about set pieces and how important they are. We knew we’d have opportunities to score from them, but we knew we’d have to defend them as well. Two minutes left in the game, I don’t know if it’s concentration or delivery it’s tough to see from my angle but, yeah, it stings.”

The loss hurts as it was apparent on each and every one of the Lady Railsplitters’ faces, but it doesn’t take away from what LMU has done in the past two seasons. Tally up the 14 wins, a South Atlantic Conference Tournament championship and Sweet 16 berth since 2007 and 14 wins a year ago plus this season’s second consecutive SAC Tournament championship, the most wins since the 90s and a second straight NCAA Tournament appearance.

LMU and the five seniors — Itzel Ballesteros, Maria Hernandez, Amanda Perez, Jessica Steen and Mikayla Vang — have changed the culture and proved it isn’t going to ever back down to any team ever.

It showed Sunday and that’s something to be proud of.

“I can say I’m satisfied with the team and how we made it so far because of what [Sean] said with the past that it wasn’t a competitive team,” Ballesteros said, “knowing that we came in and were able to change the culture and put in our part that makes me happy. I’m disappointed to lose, but I know it was all heart from my team and we went out with everything we had.”