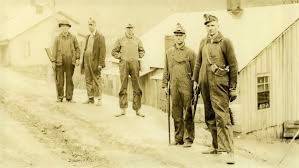 Coal miners were and are a tough breed. Shown is a group of Harlan miners during one of the strikes that occurred during the winter of 1931-32. Those striking were battling the coal companies for better conditions and wages via the establishment of a union.

Christmas past in a coal mining town

My father was 13 years old when he first went underground to dig Harlan coal. It was 1932, and the Great Depression was in full force. In those days, you counted yourself among the fortunate to earn a bit of money to buy food.

If the coal companies knew of my father’s true age, it seems they kept it to themselves. One more able-bodied miner meant just that much more coal could be wrestled from the caverns and brought up-top.

My father, James Wesley Settles, put pen to paper not long before his death to detail some of his life experiences. The following story is taken directly from his unpublished memoirs.

“It seemed to me that Christmas during the depression for a coal miner in the southeastern Kentucky coalfields was almost a lost cause. Their hunger for food did show through their pride, though.

“In the beginning days of the depression, there wasn’t any federal relief, which meant Christmas Day would come and go with miners working underground for a little money.

“Christmas over the years came without any appearance of a lighted tree in the window. To a miner in those days, showing a tree in your window was an insult to the less fortunate.

“Mom, in her cherished manner on Christmas Day, would always present me with a paper flute and my sister with a rag doll. We treasured these gifts as much as life, itself,” reads the memoir, in part.

My father recalls in his memoir what a “luxury” it was when his dad was able to afford to buy snuff for his wife and how difficult it was for his mother to scrape enough money together to purchase Studd cigarettes (his father’s favorite brand) as the only Christmas presents to one another.

“I, like other people, would gravel coal from the slate dump to fuel fire in the fireplace and in our kitchen range. I sold coal for 5 cents a burlap sack so many times that eventually, people couldn’t buy it from me. So, I would have to carry it back home. Though, when I earned money, I gave it to my parents to support their tobacco habit.

“This habit was so strong, that I became a ‘snooper,’ gathering cigarette butts along the byways. Sometimes, I would take long walks just for this cause,” reads the memoir.

My father recalls in his memoir an injury he sustained while digging coal.

“Once, I was digging for our house coal just inside of an old drift mouth when rock fell on my leg. Pulling myself free, I had to crawl on hands and knees back home. On the way, I met up with some friends of mine, with a small wagon. They took me the rest of the way home.

“I was so disappointed for getting hurt, because I was supposed to work in the mines that night with my dad. He had already worked long hours that day and planned to return that night to earn extra money. In those days, there was no such thing as an 8-hour shift. That came later, with the organization of the Union of Miners.

“My dear old dad had to return that night to the mines, alone. I constantly lived in fear that he would be seriously hurt or killed while working so far beneath the surface of the mountain,” continues the memoir.

The coal market had gotten so bad during those days that, according to the memoir, coal executives considered dropping the wages from 20 cents to 18 cents per ton.

“But, instead of lowering their pay, this particular mine closed its doors. The miners at this location didn’t make enough to pay the required rent for the company housing. Things were so bad we couldn’t afford light bulbs, so the company didn’t worry about turning off the electrical power to our house.

“One day, I told my dad I could make that old burned out light bulb burn. With his approval, I climbed up on a chair and flipped the bulb with my finger.

“He thought I was a magician. Even I was surprised when I saw it light up at my first effort. Of course, it only held out for a couple of days,” reads the memoir.

Prior to closing its doors, the company held on a bit longer by reducing the work week to just one day. Rather than pay exorbitant prices at the company store, my father decided to see if he could get some help via the federally-enacted food voucher program. These vouchers were earmarked for a “legitimate” store, rather than the company-owned one.

“My dad had applied for help, but was refused because he was employed by the mining company. A couple of days later, I slipped away from home and joined a long line of others who were waiting to be seen at the relief office. After standing there all day, I was finally next in line to be seen.

“A young lady came to the door and said ‘that will be all of the applications for today.’ As she began to close the door, I blocked it with my foot. She refused to let me in until an adult further back in line pleaded with her to take my application.

“All the other office personnel had already left. She began by telling me she could get in an awful lot of trouble by giving a voucher to a child. She asked me why one of my parents hadn’t come in, instead. I told her my dad had come in and was turned down because he was working one or two days a week for a dollar a day,” reads the memoir.

The federal employee said she would “take the chance” and issued the $3 voucher. But, first, she wanted to know exactly what would be purchased.

“I started naming off items of food. She directed me to take the voucher across the street to the H&P Grocery Store before it closed for the day.

“I hadn’t thought of how I would get three full bags of groceries the two miles back home. I started relaying them, always keeping them within sight for fear that someone would steal them from me,” reads the memoir.

My father braved the bitter cold until he reached the swinging bridge near his home.

“It was dark and I heard my mother calling my name from the far side of the road. She said ‘I’ve been searching for you all day and when we get home, I’m going to give you a whipping you will remember.’ I knew she meant what she said. However, mom excused her remark after seeing the groceries I had. She helped me carry them across the swinging bridge to our home. My dad and sister were pleased at what I had done.

“Mom prepared a feast for us, that night,” the memoir continues.

As his daughter, I can well imagine just how bleak those days must have been. I cannot remember my father taking “charity” in any form. Rather, he routinely worked two and three jobs to support his family. I can remember him arriving home from his day job at the lumber yard, eat a quick supper and head out to a “wiring” job he had contracted with local builders.

He had quite the reputation for his electrical expertise and contractors came from far and wide to hire him. Not once did his work fail to not only meet but exceed codes.

My father recalled one joyful Christmas spent during his childhood.

“There was a school play at the Baptist Church that I was in. The community and the church gave a big supper before the presentation. It was the first time I had ever eaten oyster stew. It was good,” recalls my father, in the memoir.

My father survived the Great Depression, bringing into the world four children to which he taught valuable life lessons. He taught by example honesty, hard work, giving to others in need and the value of a good education. He taught us how to love.