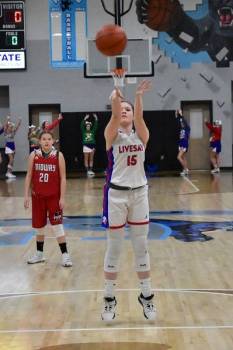 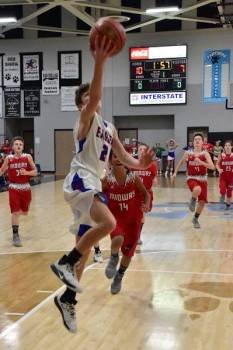 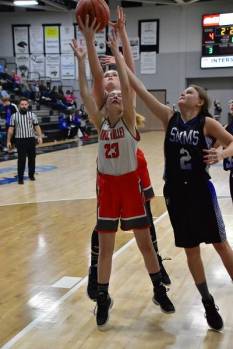 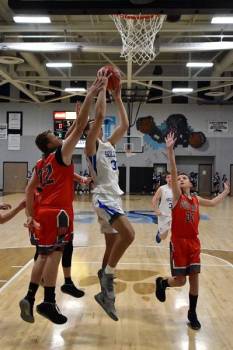 <p>Ethan Cupp played well in the paint for the Blue Devils.</p>

Day two of the 2019 Claiborne County middle school varsity tournament began with the No. 1 seeded H.Y. Livesay Lady Eagles playing the four-seeded Midway Lady Red Devils. As the Dec. 17 game tipped off, everyone thought that the edge went to the Lady Eagles.

During the first period, the Lady Eagles played well. The score was 7-1 going into the second period. Midway was playing hard but couldn’t find the basket. The Lady Eagles continued to put points on the board during the second, and Midway still looked shell-shocked. At the half, H.Y. enjoyed a 19-point advantage at 20-1.

Compared to their standards, H.Y. struggled during the third until mid-way through. The Lady Red Devils kept trying to get something going to string a few points together, but the shots kept missing the mark. The third period ended 26-3.

Both teams went heavily to the bench during the final period and the scoring slowed, but the Lady Eagles won easily 28-4. Leading H.Y. in scoring was Gracie Nash with 10. Kaylee Irvan and Ashlynn Roberts both had six. Callie Hoskins had four and Brinkley Hollin had two. Midway was led by Brooklyn Jenkins with two and two others, Izabella Cosby and Tiara Warwick, had one point each.

Next on the floor were the Eagles and Red Devils in a boys match up. The Eagles were the No. 1 seed and Midway the four seed. From the opening tip this game was quick. Midway stayed right on the heels of the one seed and were down four points at the end of the period. H.Y. tried to run away from the Red Devils in the second, but Midway stayed right there. At halftime, the Eagles still led by four at 23-19.

The Eagles came out of the locker room ready and focused. It quickly became a 12-point game, and the Red Devils were struggling to keep pace. Midway had it down to eight, but at the end of the third the score was 37-25.

The Eagles stretched their lead out and finished with a nice 51-32 victory to advance. Leading the Eagles in scoring was Braden Painter with 14. Lane Bunch had 12 and Hyrum Hinckley had 10. Noah Yonts had seven, Hayden Gilbert had four and Tanner Hill had two points.

Midway was led by Jake Smith with 14. Korbin Hatfield had eight, and Kaden Williams had six. Cole Holt and Izeya Ruiz both had two points.

The next two teams on the court were the Lady Blue Devils battling the Lady Indians. Powell Valley went out to lead. Soldiers Memorial Middle School fought back in the middle of the period, but by the end of the first period the Lady Indians held the lead.

Powell Valley was struggling to get the offense going, and turnovers allowed SMMS to tie the game with 1:14 left in the half. At the half, SMMS led by three at 22-19. The Lady Blue Devils pulled out to a six-point lead with two minutes remaining in the third and finished the period leading 31-24.

The Lady Indians had one last run in the final period and had the score down to 37-32, but that’s as close as they got. The final score was 40-32. Leading the Lady Blue Devils in scoring was Allie Jones with 21. Genesis Bailey finished with 15 points.

The final game of the night was SMMS and Powell Valley boys. The Blue Devils got off to a 6-0 start, and at the end of the first enjoyed a four-point lead at 8-4. During the second period, SMMS rolled on out away from the Indians. Mistakes were an issue for Powell Valley, which helped the Blue Devils lead 19-7 at the half.