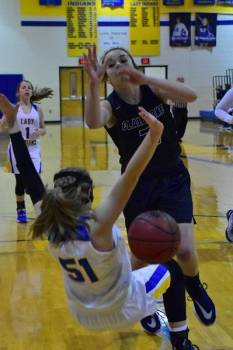 <p>Allen Earl | Claiborne Progress</p> <p>Emma Myatt led CHS in scoring, but on this play she had hard contact with her defender.</p> 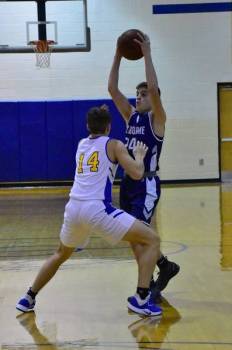 After a long Christmas and New Year’s holiday vacation, the Claiborne High School Bulldogs basketball teams finally hit the court to continue their seasons. Jan. 3 signified the start to a new year and hopefully a run to the district championship game. The opponent on this night was the Hancock County Indians, and there were four games on the schedule.

The Lady Bulldogs opened up the junior varsity action with a 7-0 run. They led after one period 10-2. The Lady Indians began the second period strong and seemed to be settling down, but Claiborne was playing good basketball.

After two periods, the score was 16-8 with the visiting Lady Bulldogs leading. The home team got closer during the third. Going into the fourth period, the Lady Bulldogs led by only four at 16-12.

Claiborne benefited from double technical fouls during the fourth against the Hancock coach and led 22-12 with four minutes to go. The Lady Bulldogs pulled away to take a 30-16 win.

Leading CHS in scoring was Emma Myatt with 12. Hannah Fugate had five, Makenzie Walker had four and Taylor Pressnell had three. Three others had two points each: Chelsey Harvey, Hailey Sexton and Jordan Fultz. Hancock was led by Lexi Linden with eight.

Next on the hardwood were the JV boys teams, and they swapped baskets to start the game. The Indians made a run and led 9-4 with 35 seconds left. The Bulldogs didn’t score and the period ended 9-4.

Playing with a five-point lead, the Indians had momentum and carried it up to halftime where they led 18-12. Claiborne came out of the break and started making good things happen. They took the lead down to three points before the Indians made an outstanding run that put them ahead 28-17 going into the final period.

The Indians quickly and rapidly established themselves out front and won the game 38-23. Dawson Yount led the Indians to victory with 11 points. CHS was led by Levi Peoples with eight. Seth Morelock and Landon Wilson both had five, Zack Bailey had three and Isaac Moyers finished with two points.