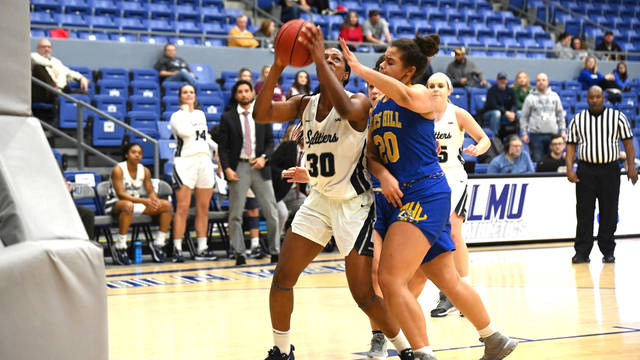 Shermeria Quarles goes up for a shot against Anderson on Saturday. She finished the evening with 11 points in 25 minutes of action.

ANDERSON, S.C. — LMU and No. 16/22 Anderson slugged out a low scoring first half with the Lady Railsplitters holding a two point advantage at the half. But a 22-3 third quarter run by the host Trojans ruined LMU’s upset chances as they fell 67-49 Saturday afternoon.

• The first half was a defensive struggle, with the teams tied at 8-8 after the first stanza.

• LMU shot 18.8 percent from the field in the first quarter, with Anderson not doing any better as they hit 22.2 percent.

• Both teams heated up a bit in the second quarter, with LMU outshooting AU 42.9% to 35.3%, but a three pointer by Lindsay Proffitt and a pair of free throws by Addi Kirkpatrick gave LMU the 24-22 lead at the half.

• AU came out hitting nearly 60 percent in the third quarter and opened the half with a 22-3 run to break open the game.

• Shermeria Quarles scored seven of her 11 points in the fourth quarter and helped LMU cut the lead to 10 points on two occasions, but AU went on a late run and held on for the 67-49 win.

• Sydney Newsome led the team with eight rebounds and added in seven points.

• Alexey Mollenhauer led the Trojans with 18 points, 14 of which came in the third quarter. She also led AU with 11 rebounds.

LMU will close out a two-game SAC road swing Wednesday evening as they travel to Tusculum. The Pioneers are currently 13-3 overall and 8-2 in SAC play after defeating Wingate by 20.