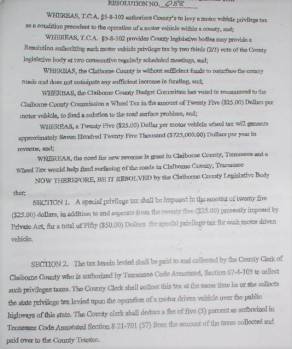 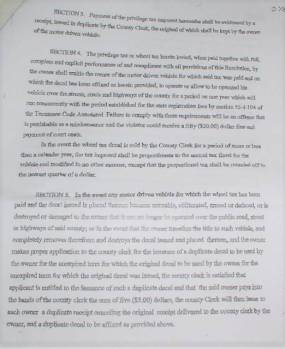 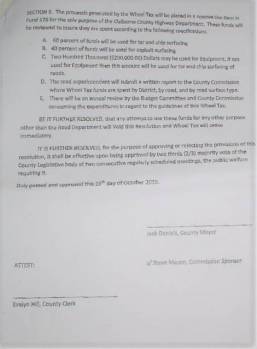 Claiborne County Mayor Joe Brooks says he vetoed a resolution requiring quarterly reports from his office, the road department and the sheriff in order to clean up a potentially muddy situation.

“Since two streams of thought have converged, which can now have the possibility of convoluting the desired outcomes of both, it is necessary to separate them. That is the sole reason for me administering my power of veto upon resolution 2019-091,” reads a portion of the explanation letter, drafted by Brooks.

Brooks states in the letter that he felt it “best to amend” the actual road department wheel tax resolution, adopted in 2015, rather than let stand a second one with new requirements.

Amending the original resolution, he says, would prevent anyone from misconstruing the additional requirements to mean all work being done, even those jobs not arising from the wheel tax money.

“…neither I nor sheriff Brooks have a problem sharing information with you, however, the amendment (to the resolution adopted last month) seemed to have the appearance of being tit-for-tat in that if you want a quarterly report then you must give one also,” reads the letter, in part.

The original draft of resolution 2019-091 required that only the road department submit quarterly reports. The resolution was amended by commissioner Kim Large to include reports from the county mayor and the sheriff. Commissioner Steve Mason further amended the document to include reports of all check disbursements from the Claiborne Finance Office.

In the letter, Brooks proposes that each of the 21 county commissioners be required to submit monthly constituent contact log reports.

“Listing the interactions each of you are making to ensure you are doing the very best you can to disseminate the county business at hand to each of your constituents and gathering their input on the issues facing Claiborne County is an equally important part of our local county government and should be included along with a mayor’s report and a sheriff’s report….,” reads the letter, in part.

Resolution 2020-010, if adopted this month, will require road superintendent Ronnie Pittman to submit quarterly reports of work done during the previous three month period. The list would include those roads that were maintained, repaired or resurfaced by name, district and type.

Up for consideration will also be resolution 2020-011 which, if adopted, will require monthly reports from the county mayor, the sheriff and each of the 21 county commissioners.

“…the county mayor’s report shall include all projects the mayor is working on that is pertinent to county government, economic and community development and any other information that would be deemed necessary for public knowledge.

“…the county sheriff’s report shall include the monthly average jail population, any jail inspections and accidents or incidents that occur within the jail or that involve any deputies.

“…the county commissioners’ reports shall be provided by all (21) county commissioners to include all interactions with their constituents. A ‘Constituent Contact Log’ shall include all attempts made to provide the information contained in monthly commission packets to their constituents, any initiatives they are working on for their respective districts and all information from any committees they are members of,” reads the bulk of the resolution.

No resolution appears to have been drafted to require the Claiborne Finance Office to submit monthly cash disbursement reports, as requested last month by commissioner Mason.

It is unclear, at this time, whether finance officer Angelia Tucker will voluntarily submit the lists. During the December meeting, Tucker said a change in payroll systems resulted in the unavailability of that particular report.

She said she would look into the matter and see if she could substitute another report to replace the one she used to submit.

Brooks’ explanation letter, dated Dec. 24, was time-stamped by the county clerk on Jan. 17 – the deadline for distribution of the monthly commissioner information packets.

The Claiborne Commission will meet in regular session on Jan. 27, beginning at 6:30 p.m., inside the large courtroom of the Claiborne Courthouse.