Lady Bulldogs defeat Lady Knights but at a cost 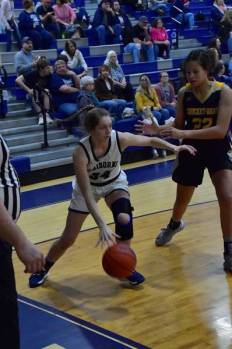 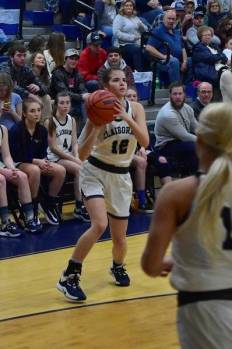 <p>Trinity Jones gave the Lady Bulldogs a much needed boost during the final period.</p> 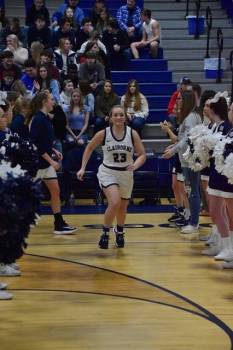 <p>Kaylee Cox is announced into the game.</p>

Game two against Chuckey-Doak, Jan. 24, featured the girls varsity teams. The Lady Bulldogs were slow to start, but the Lady Knights were not. Claiborne fans were delighted to see Sarah Fultz back on the court, but the Carl R. Green Gymnasium grew silent when she fell down once again holding her knee.

The Lady Bulldogs almost pulled even with the Lady Knights after one period, 10-8. The second period scoring was opened with a Lady Knights three off the glass. Scoring was at a premium during the second as both teams struggled to find the bottom of the net. Claiborne tried to catch up and nearly got there. The score was 17-13 at the half.

Claiborne had another player to hit the floor hard, this time it was Kaylee Cox and she looked to have injured her arm and left the game. The Lady Bulldogs still battled and kept pace during the third period. With 1:44 remaining in the period, Claiborne was down by only three at 24-21.

With 5:57 remaining in regulation, Emma Beason gave the home team the lead at 27-26. The game went back and forth with both teams struggling to get the momentum needed to get the win.

Sexton added a point from the line making it 38-29. The visitors hit a basket and made the score 38-31 with 13 seconds remaining. Emma Myatt hit one from the stripe and Chucky-Doak missed two costly free throws. The final score was 39-31.

CHS head coach Ariel Nickell said this following the game, “It wasn’t pretty, but I’m proud that they found a way to win it. We have a couple players go down. We hope they can get back and help us, but we don’t know yet. Any win is a good win. We’ll take it.”

Claiborne was led by Emma Beason with 12. Hailey Sexton had nine. Trinity Jones had five but her four at the very end sealed the game.

Skylar Cook and Emma Myatt both had four, Macie Sumner had three and Taylor Pressnell had two. Sierra Jaynes led the Lady Knights with nine. The return of both Cox and Fultz will be determined later.