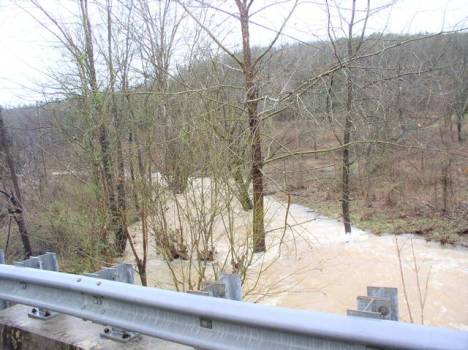 <p>Jan Runions | Claiborne Progress</p> <p>The torrential rainfall on Feb. 6-7 creates a churning monster as Barren Creek overflows its banks and sloshes into neighbors’ yards. The creek is well-known within the county for the drowning deaths of at least 24 people in 1916 when some 9 inches of rain fell in just five hours.</p> 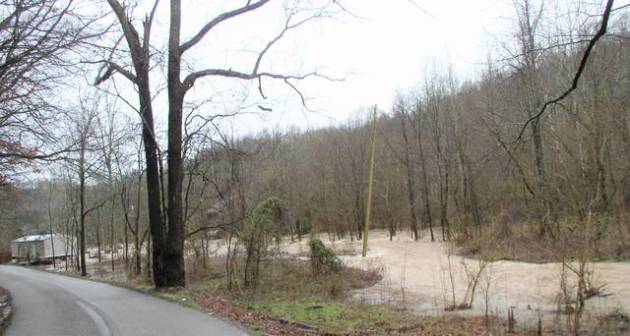 <p>Jan Runions | Claiborne Progress</p> <p>The torrential rainfall on Feb. 6-7 creates a churning monster as Barren Creek overflows its banks and sloshes into neighbors’ yards. The creek is well-known within the county for the drowning deaths of at least 24 people in 1916 when some 9 inches of rain fell in just five hours.</p>

As of press time, Claiborne County residents had made it safely through the first round of the tag team punches from torrential rains and snowfall that hit the area on Feb. 5-7. However, the match is not yet finished, as meteorologists had initially predicted an additional 4-6 inches of the wet stuff by Thursday morning of this week.

Although the county made it through to Wednesday morning with little additional rain, the weather service is now predicting an additional 1-3 inches between Wednesday evening and Thursday morning (Feb. 12-13).

Many areas were hard hit as residents watched the proverbial creek rise and rushing rainwater sluice along roadways, creating makeshift ponds. No corner of the county was safe.

Residents living along Gap Creek Road are again stranded as they watch a repeat performance from last February’s torrential rains. The families who live along this creek have been witness to decades of flooding that continue to demolish the roadway.

In another area of the county, residents on Pearman Lane are also stranded, waiting for the rainwater to recede.

On Little Creek, rushing waters have eaten away a chunk of the roadway, leaving fully exposed culvert tile that normally spills rainwater runoff into the creek.

Residents in the Midway community are keeping watch of Sweat Pond and hoping against a repeat performance from last year, when flood waters prevented travel along Mountain Road for weeks.

David Breeding, executive director of the Claiborne EM/HS, said on Monday that road crews were out nonstop all weekend doing repairs and assessing the situation. In a phone call Monday morning, TEMA officials told Breeding that “they are still crunching the numbers coming in from the first round, to see whether the state will meet its nearly $9 million threshold to qualify for flood damage assistance.”

Claiborne county, he says, has reached its countywide threshold of approximately $118,000 in uninsured damages.

TEMA counts each weather system as a separate episode. Which means, the state and the individual counties cannot combine these two most recent systems when assessing whether the statewide threshold has been met.

As of Friday, Breeding said the county was not as bad off as was the case last year.

”There’s not been as much road damage, so far, this year. For instance, the folks on Julia Lane, in the Speedwell community, were not able to get out for three weeks after the rains hit last February,” said Breeding, on Friday.