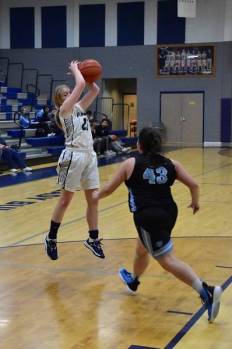 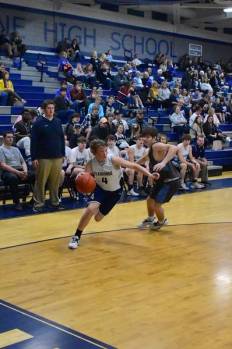 The second meeting between Claiborne and Cumberland Gap High Schools was held, February 13, at the home of the Bulldogs. With four games on the schedule it was the junior varsity girls who took the court first.

Claiborne opened the scoring up with two free throws and the Lady Panthers hit a three. The Lady Bulldogs went on ahead to lead 8-3. They pushed their advantage out to 10 at 13-3 going into the second period. Claiborne extended their lead out to 18-6 with just under two minutes remaining in the half. At the half Claiborne led 22-10.

During the third period, Claiborne played hard down in the paint and had several second chance points while the Lady Panthers started playing better as well and at the end of the third Claiborne led 35-16. Both teams played deeply into their bench during the final period and the Lady Bulldogs kept Cumberland Gap from getting a run and defended their home court 46-19.

Leading Claiborne in scoring was Emma Myatt and Hannah Fugate both with nine. Makenzie Walker had eight, Chelsey Harvey and Taylor Pressnell both had six. Hailey Sexton dropped in four and Carlye England had two as did Kylee Loft. Cumberland Gap was led by three players with five points: Naomi Grener, Addie Brooks and Berry Dixon. Abbie Mayfield and Halle Green both had two.

The junior varsity boy’s were next and the Bulldogs opened the game up with a three from the corner. Cumberland Gap then scored eight unanswered. Claiborne rallied back and only one point separated the two at 12-11 with the Panthers enjoying the lead. During the second period, Claiborne took control and quickly moved ahead by six at 19-13 and by halftime increased their lead out to 10 at 24-14.

The Panthers went on a run during the third and got to within six points, 32-26, with a minute left. After three periods, the score was 32-28. The Panthers pulled to within two points early during the fourth period but Claiborne had one last run that gave them a much needed cushion. The Bulldogs completed a JV sweep by the final score of 46-36.

Leading CHS in scoring was Zack Bailey with 12. Landon Wilson had seven, Seth Morelock and Levi Peoples had six each, Tyler Myatt had five, Conner Atkins and Isaac Moyers both had four and George Smith finished with two points. The Panthers were led Lance Owens with 13 and Dylan Ellison with 11. Jon Graves had five, Gabriel Peterson had four and two others had two points each including Brian Baker and Seth Massengill.