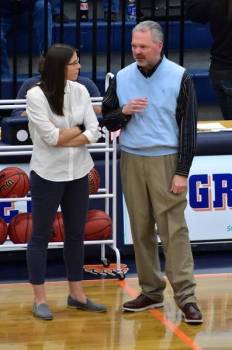 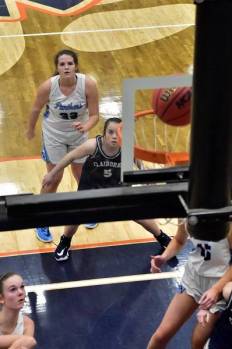 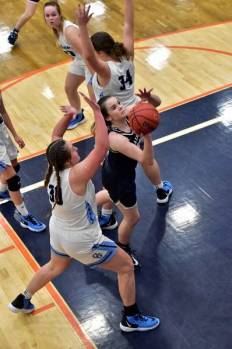 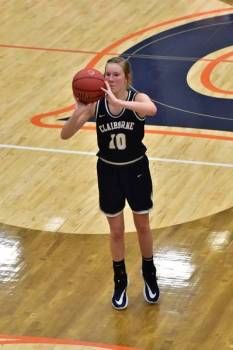 As if there was any question or doubt, the Lady Panthers and Lady Bulldogs just had to meet for the third time, February 22. This time was different because it was District 2 AA tournament time in Grainger County. It seems that these two always find somehow to meet each other during tournament play.

Hailey Sexton hit a three to retake the lead but Kerns quickly tied it at 14. The Lady Panthers Emma Brooks scored from the line and Abigail Garner gave Cumberland Gap a three point lead, 17-14. Abbi Fultz hit back to back baskets in the paint and gave the Lady Panthers a six point lead with 1:38 left in the half. Emma Myatt hit the first of two free throws Myatt then hit a basket but missed the “and-one” free throw. With 1.6 seconds left Beason drove to the hoop and got fouled. After her free throws the Lady Panthers lead was down to four at 21-18 and the first half ended the same.

Claiborne came out and got the deficit to one point but Kayli Hinckley gave the Lady Panthers two more right before Myatt scored two for the Lady Bulldogs. The back and forth continued with a Sexton three that gave CHS the lead. She added from the free throw line and Trinity Jones hit another three giving CHS a five point lead, 29-24. After a Fultz free throw, Emma Brooks basket and another Fultz score helped the Gap retake the lead 30-29. Jaden Brock hit one of two free throws and the Lady Panthers now led by two. The third period ended with the Gap leading 31-29.

Abbi Fultz hit one in the paint and Claiborne Coach Ariel Nickell wanted a quick timeout. Beason hit a three narrowing the score to 33-32. Sexton hit a three and gave her Lady Bulldogs the lead at 35-33. Brooks hit a basket and a following free throw retook the lead at 36-35. Garner extended the lead with a basket in the paint and Kylie Fultz hit another in the paint and gave the Gap a five point lead, 40-35 with 4:13 remaining in the game. The two teams went back and forth with Sexton tying the game at 43 and the Fultz hitting a layup giving the Lady Panthers the lead again this time at 45-43 with only 30 seconds left.

It was a three point game again with 8.8 seconds left and the Lady Bulldogs were going for the tying basket out of a timeout. Claiborne had the look they wanted to tie the game but the shot just missed it’s mark and the Lady Panthers survived and moved on by the final score of 46-43.

Coach Dennis Cline said this about the win,

“They played hard, we played hard, we were just fortunate enough to score more than they did. Hats off to Claiborne they had a play that gave them a good look and just missed the shot. We missed too many free throws in the second half, we were lucky but I’m glad we’re moving on.”

Leading the Lady Panthers in scoring was Kylie Fultz with 13 and her twin Abbie had 11. Neveah Kerns had seven, Preseley Cole had five, Abigail Garner finished with four and Kayli Hinckley along with Emma Brooks each finished with three points.

Claiborne was led by Hailey Sexton with a breakout game, she had 16 points. Macie Sumner had 12, Emma Beason had seven, and two others had four points each, Trinity Jones and Emma Myatt.

With the loss Claiborne will put the basketballs back in the rack and prepare for the 2020-2021 season.