Hoskins is a volunteer star 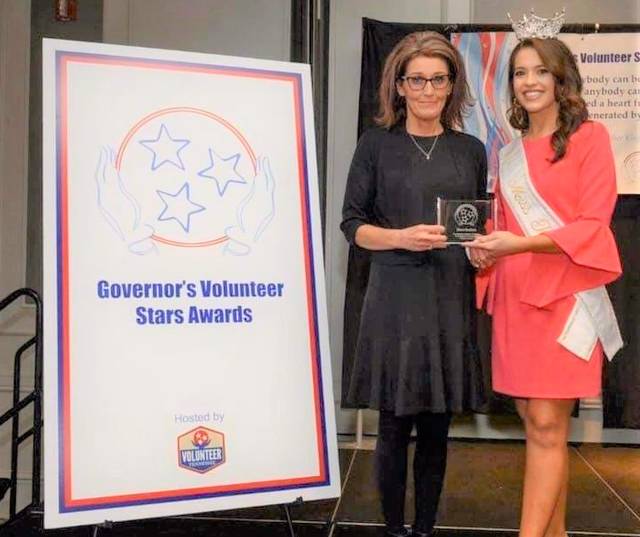 Sherri Hoskins says she is “honored and humbled” to have received the Tennessee Volunteer Stars Award. Hoskins was chosen to represent Claiborne county during the annual Awards Banquet, recently held in Nashville.

Each year, one adult and one youth (up to the age of 25 years old) are chosen to represent their county for exemplifying the volunteer spirit in service to others.

Hoskins, who is the director of Appalachian Promise, has spent the last few years creating and instituting a pilot program that gives tangible support to those qualifying inmates willing to put forth the effort to make a change.

The Fresh Start Program caught the eye, early on, of Tennessee Governor Bill Lee, who has since encouraged other counties within the state to use the program guidelines in a similar way.

During the last year or so, Hoskins’ “guys” have proven that the program can make a sea change in the lives of inmates, while still incarcerated. Tens of thousands of dollars have gone to paying court costs, outstanding child support, bad debts and charge offs including late due utility bills, to name a few. The money is earned by the inmates through a cooperative effort between Homesteader, Inc., whose owners say they believe in the program enough to hire the men on, full time, at full salary.

“This would never have been possible without the hard work and dedication of these men to have a better life. This is a group effort and it takes the Sheriff’s Department, the Mayor and, of course, the ‘Boss Man’ at Homesteaders – Anthony Mountain – and each person there,” said Hoskins, during a previous interview.

Fresh Start is not your typical work-release program. Hoskins spent two years writing the initial objectives and creating strict qualification guidelines. Those who qualify must have attained the rank of trustee. Those incarcerated on more serious charges are banned from the program.

In February of last year, Hoskins began with 12 inmates. Before long 12 more were added to the workforce, as they qualified.

The inmate salaries automatically go into an “untouchable” bank account. The funds are used to pay off any debts owed by the inmate. The bank accounts also help in paying living expenses like rent and utilities, once the inmates are released.

The program also addresses ways in which to improve credit standings. Through their labor, any unpaid bills that show on the inmates’ credit statements are paid off with their wages.

Courses in money management and “etiquette and basic life skills” are also required.

Hoskins says she is grateful for all the help she has received from local and state officials, like the governor and State Representative Jerry Sexton, along with Claiborne Sheriff Bob Brooks and Anthony Mountain, owner of Homesteader, Inc.

The Governor’s Volunteer Stars Award is the highest honor that a volunteer can attain in Tennessee.

Each year, 1.6 million volunteers give over 137 million hours of community service, contributing $3.3 billion to the state economy.