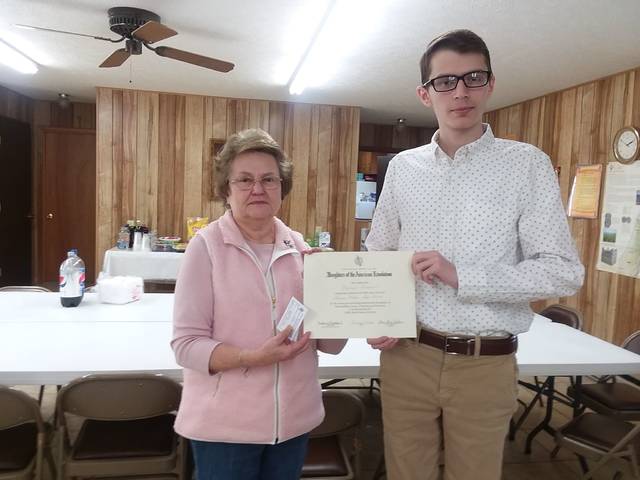 Michael Locascio is shown accepting the Good Citizen Award from the Major George Gibson National Society of the Daughters of the American Revolution (NSDAR)during the organization’s February meeting.

The Major George Gibson Chapter of the National Society of the Daughters of the American Revolution (NSDAR) has awarded Michael Locascio, a student from Thomas Walker High School, with the DAR Good Citizen Award.

Locascio was chosen for his many academic accomplishments including earning a spot on the A honor roll from 2016-2019, doing so with an accumulative GPS of 4.0.

Other activities include membership in leadership capacities with several clubs, teams and varsity activities for which he was the recipient of many awards.

Locascio is Vice President of his Senior Class and an executive officer in the Junior Reserved Officers Training Corps (JROTC) Battalion. During his high school career, Locascio was involved in a consistent manner in numerous Community Service Projects.

He aspires to attain an undergraduate degree in pre-med from the University of Virginia prior to transferring to New York University to obtain a graduate degree as a general physician. With that degree, he plans to return to a rural environment as a physician, where he will serve no less than five years.

The DAR Chapter is excited with their choice and its members are in agreement that Locascio is a young man who surpasses all the requirements to be a DAR Good Citizen – dependability, service, leadership and patriotism.